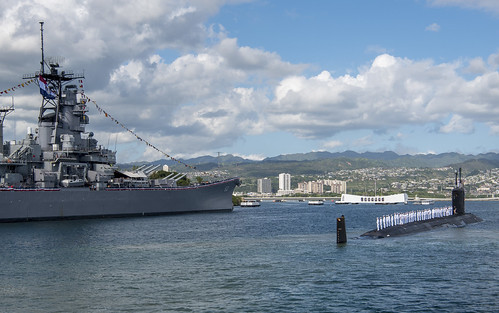 PEARL HARBOR, Hawaii - The Pearl Harbor submarine community welcomed the crew of 160 Sailors and officers, along with their families, of the Virginia-class fast-attack submarine USS Missouri (SSN 780) to Pearl Harbor following a successful homeport change from Groton, Conn., Jan. 26.

Missouri is now assigned to Submarine Squadron 1, and is the sixth Virginia-class submarine stationed at Joint Base Pearl Harbor-Hickam.

“I can’t thank enough the staff of Submarine Squadron One and COMSUBPAC for facilitating this transfer,” said Cmdr. George Howell, commanding officer of Missouri. “There are so many logistical arrangements to be made to get 160 crew members to Hawaii and they were there to help every step of the way.”

Missouri was commissioned and christened by the ship’s sponsor, Becky Gates, wife of former Secretary of Defense Robert Gates, during a ceremony at General Dynamics Electric Boat in Groton, Connecticut, Dec. 5, 2009.

Missouri is the fifth Navy ship to be named in honor of the state of Missouri. The last USS Missouri, the legendary battleship, saw action in World War II, the Korean War and the Persian Gulf War, and the battleship was also the site where Fleet Adm. Chester Nimitz, Gen. Douglas MacArthur and many other U.S. and Allied officers accepted the unconditional surrender of the Japanese at the end of World War II.

Missouri’s senior enlisted Sailor said how important support from the people in Hawaii was for a smooth transition from Groton.

“The Pearl Harbor community has been truly amazing to Mighty Mo,” said Master Chief Raj Sodhi, Missouri’s Chief of the Boat, and a native of Fairfax, Virginia. “They have addressed the individual needs of our families and Sailors and have worked hand in hand with our team to make us feel welcome and excited to call Hawaii our home and O’hana.”

Howell also expressed his excitement to have finally arrived after the long journey from Connecticut.

“We’re happy to finally be here in Hawaii,” said Howell. “We left Groton, Connecticut with a foot of snow and a temperature of only 1 degree so pulling in here is a nice change.”

Howell said the crew is excited to experience a new homeport as well as a new culture.

“The crew is very excited to experience the beauty of the island and the Hawaiian culture,” said Howell. “We’re also looking forward to supporting the COMSUBPAC mission.”

The 7,800-ton Missouri is 377-feet long, has a 34-foot beam, and capable of diving depths greater than 800 feet and operate at speeds in excess of 25 knots submerged. Missouri is designed with a nuclear reactor plant that will not require refueling during the planned life of the ship - reducing lifecycle costs while increasing underway time.