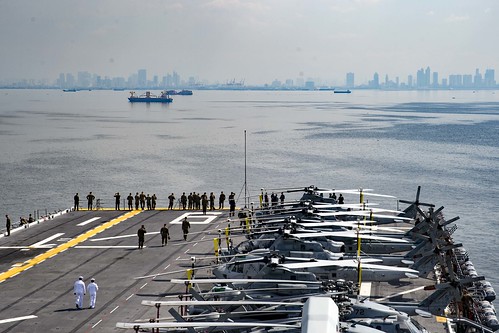 More than 2,500 Sailors and Marines aboard Bonhomme Richard are visiting Manila to enhance the strong ties between the Philippines and the U.S., and to experience the Philippine culture.

“The Sailors and Marines aboard Bonhomme Richard have worked hard over the past few weeks conducting exercises and underway operations,” said Capt. Larry McCullen, commanding officer of Bonhomme Richard. “Following exercise Cobra Gold, we’ve continued our shipboard training and patrol, and now we have the opportunity to experience liberty in Manila. I’m grateful for the chance to share the amazing culture of the Philippines with the crew during this port call.”

While in Manila, Sailors and Marines will have the opportunity to participate in Morale, Welfare and Recreation (MWR) tours, and a community relations project where service members will get the chance to help those affected by the eruption of the Mayon Volcano in the province of Albay.

Mayon Volcano, which initially erupted in January, continues to be active and has displaced an estimated 90,000 people. Service members will pack food and other supplies for distribution to those affected by the volcano.

“We chose this COMREL because it responds to a current natural disaster that is affecting thousands of Filipinos,” said Lt. David Hammond, Bonhomme Richard’s assistant command chaplain. “Although we’re unable to have personal interaction with the evacuees, we know that our work will reach them. We're grateful for the invitation to play a small role in pitching in to help provide for others during a time of need.”

Bonhomme Richard’s port visit comes after the ship’s participation in the multinational exercise Cobra Gold in the Kingdom of Thailand.

As the 37th iteration of the exercise, Cobra Gold focused on humanitarian assistance and disaster relief. Among participating nations were Indonesia, Japan, the Kingdom of Thailand, Malaysia, the Republic of Korea, Singapore and the United States.

Bonhomme Richard, part of Amphibious Squadron 11, is operating in the Indo-Pacific region as part of a regularly scheduled patrol and provides a rapid-response capability in the event of a regional contingency or natural disaster.