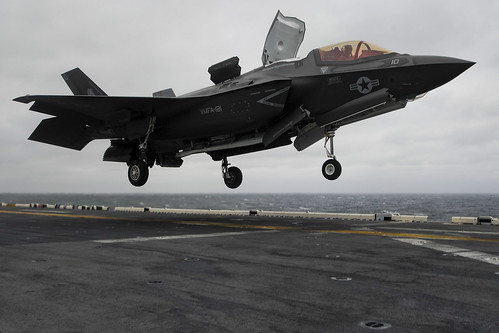 EAST CHINA SEA - A detachment of F-35B Lightning II's with Fighter Attack Squadron 121 (VMFA-121) arrived aboard the amphibious assault ship USS Wasp (LHD 1) March 5, marking the first time the aircraft has deployed aboard a U.S. Navy ship and with a Marine Expeditionary Unit in the Indo-Pacific.

"Pairing F-35B Lightning II's with the Wasp represents one of the most significant leaps in warfighting capability for the Navy-Marine Corps team in our lifetime," said Rear Adm. Brad Cooper, commander, Expeditionary Strike Group 7. "This 5th generation stealth jet is extremely versatile, and will greatly enhance and expand our operational capabilities.”

VMFA-121 pilots are scheduled to conduct a series of qualification flights on Wasp over a multi-day period. Following qualifications, the F-35B’s and 2,300 Marines that make up the 31st MEU will deploy aboard ships of the Wasp Expeditionary Strike Group for follow-on operations in the Indo-Pacific region as part of a routine patrol to strengthen regional alliances, provide rapid-response capability, and advance the Up-Gunned ESG concept.

The Up-Gunned ESG is a U.S. Pacific Fleet-initiated concept that aims to provide lethality and survivability to a traditional three-ship amphibious ready group by integrating multi-mission surface combatants and F-35B into amphibious operations. By adding these enabling capabilities, the amphibious force can more effectively defend against adversarial threats in the undersea, surface, and air domains, as well provide offensive firepower to strike from the sea.

The 31st MEU is the only forward-deployed MEU in the region. The F-35B serves as one airframe within a multitude of air capabilities of the MEU's Air Combat Element. Air, ground, and logistics forces make up the MEU's Marine Air-Ground Task Force (MAGTF), a composite of capabilities that allow the MEU, in partnership with Navy amphibious ships, to conduct a wide-range of missions from crisis response to disaster relief.

“This is a historic deployment,” said Col. Tye R. Wallace, 31st MEU Commanding Officer. “The F-35B is the most capable aircraft ever to support a Marine rifleman on the ground. It brings a range of new capabilities to the MEU that make us a more lethal and effective Marine Air-Ground Task Force.”

The arrival of the F-35B culminates testing and shipboard structural modifications on Wasp that began in 2013. Wasp completed an overhaul in 2017 and subsequently departed Norfolk to forward-deploy to Sasebo, Japan as part of a Department of Defense effort to place the most advanced capabilities in the Indo-Pacific.

“Deployment of the versatile F-35B enhances the full range of Expeditionary Strike Group capabilities with one of the world’s most technologically-advanced air warfare platforms,” said Capt. Colby Howard, Wasp commanding officer. “With the specific upgrades Wasp has received, the Navy Marine Corps team in the Pacific is better positioned than ever before to support our commitment to the security of Japan and the region.”

The Wasp ESG is on a routine patrol in the Indo-Pacific, providing U.S. Seventh Fleet a rapid-response capability in the event of a contingency and working with partners and allies to increase combined capacity for regional security.

Seventh Fleet, which celebrates its 75th year in 2018, spans more than 124 million square kilometers, stretching from the International Date Line to the India/Pakistan border; and from the Kuril Islands in the North to the Antarctic in the South. Seventh Fleet's area of operation encompasses 36 maritime countries and 50 percent of the world’s population with between 50-70 U.S. ships and submarines, 140 aircraft, and approximately 20,000 Sailors in the 7th Fleet. 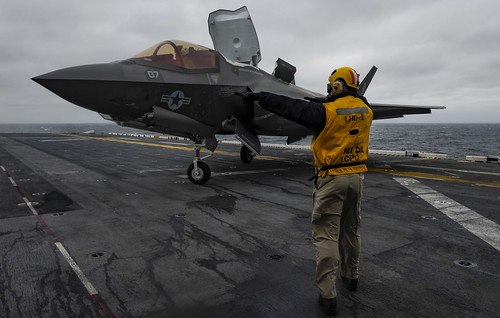 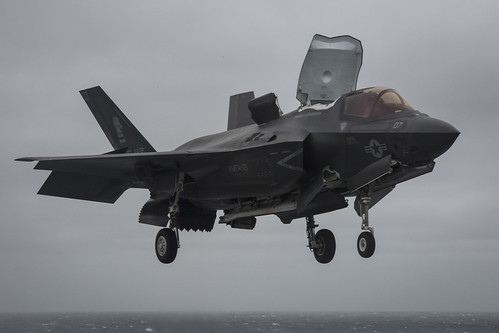