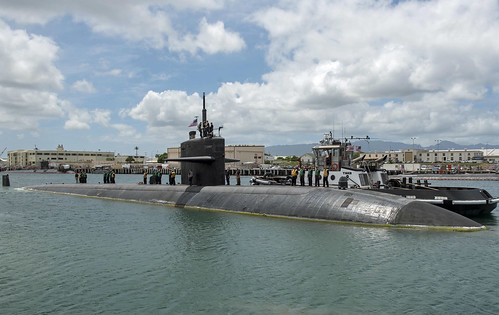 PEARL HARBOR - Joint Base Pearl Harbor-Hickam bid a final farewell to the Los Angeles-class fast-attack submarine the USS Bremerton (SSN 698), April 20, as it began a transit to its namesake, Bremerton, Washington, where it will begin the inactivation and decommissioning process.

As Bremerton departed, Sailors, submarine veterans, friends and families of the crew looked on from the pier, and celebrated her 37 years of honorable service to the U.S. submarine force.

"It feels great to be here and the boat is in excellent condition," said Anderson, who commanded Bremerton from 1981-1982. "It's a tribute to the hard work the crew has put in and it's really an honor to be a part of their last cruise."

Master Chief Fire Control Technician (Submarine) Wade Jacobson, Bremerton's chief of the boat, and a native of Alum Bank, Pennsylvania, thanked everyone for their support of Bremerton and her crew.

"It's tough saying goodbye to not only friends and family, but all the other entities that have taken care of the 'Badfish' for the past 30-plus years," said Jacobson. "They've devoted countless hours to ensure that the crew was trained and fully ready for every task we've accomplished over the life of the ship."

During Bremerton's 37 years of successful service, she completed 17 deployments while performing missions vital to national security and developing maritime partnerships in the Indo-Pacific region.

Jacobson acknowledged that the move from Pearl Harbor to Bremerton will be bitter sweet, but the crew is excited to be the last to represent the Washington warship.

"There's always something special about being the last crew to do things," said Jacobson. "We're looking forward to the final dive, the final surface, the final reactor shutdown, and many other 'final' events."

USS Bremerton was commissioned on March 28th, 1981 and is named after the city of Bremerton, Washington. It is the tenth ship of the Los Angeles-class of nuclear attack submarines. The vessel is 362-feet long, displaces 6,900 tons and can be armed with sophisticated Mark-48 torpedoes and Tomahawk cruise missiles.