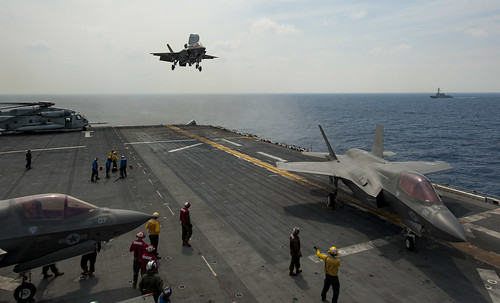 The operations were part of a routine and regularly scheduled patrol but brought together two San Diego-based destroyers to flex the composite of amphibious ships as an “Up-Gunned Expeditionary Strike Group.”

“The crew worked very hard to prepare for this patrol, and I am proud to say they performed extremely well as we integrated with the 31st Marine Expeditionary Unit and introduced the F-35B Joint Strike Fighter to the fleet,” said Capt. Colby Howard, Wasp commanding officer. “We now have a chance to enter port and prepare for our next adventure with 7th Fleet.”

Over the course of the patrol, 31st MEU Marines and Wasp Sailors trained together in a wide range of missions, leveraging the ship’s large flight deck for airlift of Marine infantry forces, well deck for landing craft movement, and expansive medical capabilities for casualty response drills.

The patrol culminated with the Sailors and Marines successfully completing the MEU’s Certification Exercise (CERTEX). The certification signified that the combined team could conduct full range of operations, including beach raids, non-combat evacuations, mass casualty response, and the search and seizure of cargo vessels.

Supporting the F-35B demonstrated the adaptability and resiliency of the Wasp crew who worked hand-in-hand with MEU maintainers and pilots to streamline processes and ensure operations could be safely conducted.

“Our Sailors performed and the integration went well and as planned,” said Wasp Aviation Intermediate Maintenance Department Leading Chief Petty Officer Master Chief Aircraft Maintenanceman Tom Kreinheder. “Just considering the overall concept of the performed maintenance requirements in support of the F-35B during its first deployment, it displays the efficiency of these Sailors in keeping the aircraft ready. Also taking into account the integration and training we received from the 31st MEU and the attached squadrons shows that our Sailors learned a great deal and took their skills to the next level.”

Wasp will now enter a continuous maintenance availability (CMAV), a period dedicated to maintenance and repairs, as well as to test the ship’s systems to certify they can perform at optimal standards.

Wasp arrived in Sasebo in January 2018 after transiting from Norfolk, Virginia, as part of a shift in forward-deployed assets to replace the amphibious assault ship USS Bonhomme Richard (LHD 6) as the Amphibious Force 7th Fleet flagship.

Wasp remains forward-deployed to Sasebo, Japan, to provide a ready-response for any contingency in the Indo-Pacific. 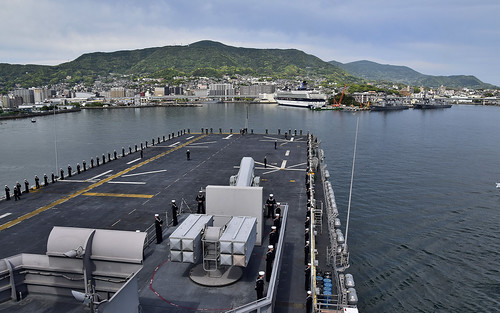