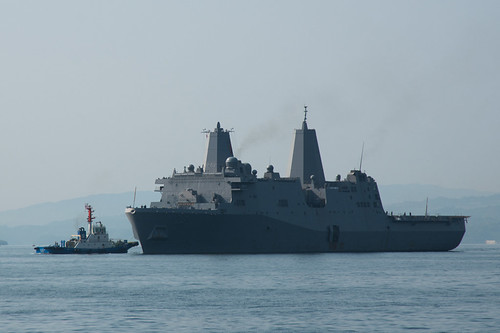 Green Bay, serving as the amphibious transport dock in the Wasp Expeditionary Strike Group, completed all major events that were part of a pre-set Navy-Marine Corps interoperability and proficiency continuum, first a basic integration phase and then a final certification.

Green Bay provided unique enabling capabilities to the ESG by hosting a boat company assigned under 1st Battalion, 1st Marines (1/1) and a detachment of attack helicopters. Sailors aboard Green Bay supported the MEU in all necessary evolutions to get Marines ashore for whatever training mission was needed.

“This was a very successful deployment for us,” said Capt. Tom Shultz, commanding officer of Green Bay. “Between personal qualifications, training, certifications, operations and multiple exercises, we grew to a new level of readiness.”

In addition to events with the Marines, Green Bay also completed several unit-level certifications in areas such as seamanship, navigation, and aviation.

Green Bay Sailors performed a series of evolutions to display technical proficiency to earn the certifications while being observed by qualified senior Sailors from Afloat Training Group (ATG).

The certifications came as a result of much pre-planning and ensuring everything was in order for the inspection.

“We train our junior Sailors for a month prior to ATG arriving on what we will be tested on,” said Quartermaster 3rd Class Fernando Gonzalez, from Ann Arbor, Mich., in regards to the navigation certification. “We complete the checklists, verify everything is in working order, and present to ATG.”

During the patrol, the Sailors onboard participated in several weapons qualifications, engineering and damage control drills and ship handling qualifications in order to ensure maximum readiness.

The Wasp ESG serves under the Amphibious Force 7th Fleet based in Okinawa, Japan, which is 7th Fleet’s task force for expeditionary operations. The task force oversees forces from Guam to Sasebo to Yokosuka to provide the region with a response capability in the event of a contingency.