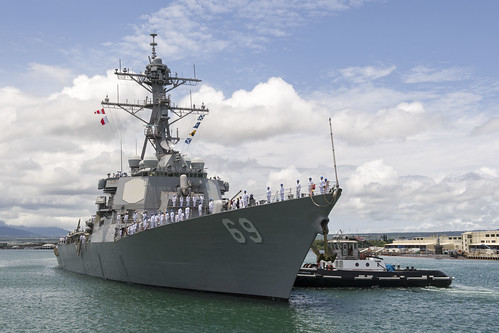 The crew manned the rails as Milius passed the USS Arizona Memorial, while friends and spectators were waiting for them on the pier, giving the ship a warm welcome to Hawaii.

"We are grateful and excited to have the opportunity to stop in Hawaii," Cmdr. Jennifer Pontius, Milius' commanding officer said. "This not only provides the crew some much-earned liberty, but allows us to wrap up final deployment preparations prior to our arrival to Japan."

Milius recently departed San Diego, officially beginning its transition to Forward Deployed Naval Forces-Japan (FDNF-J) in Yokosuka, Japan. The destroyer will join FDNF-J in U.S. 7th Fleet and brings with it some of the most technologically advanced warfighting capabilities to the Indo-Pacific region.

While in port, the crew will take on supplies, complete any emergent repairs and conduct Ballistic Missile Defense training. The crew will also get the opportunity to enjoy some of the local Hawaiian culture and visit some historical sites.

"I am looking forward to experiencing Hawaii as we travel to Japan," said Pasimiofield. "I want to visit the USS Arizona Memorial to honor those fallen during the Pearl Harbor attack and bear witness to a piece of our military history."

Following the port visit, Milius will continue its transit to Yokosuka, Japan.