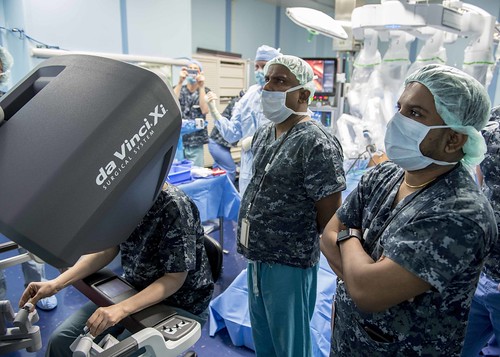 The joint team of multinational surgeons and medical professionals successfully completed a cholecystectomy, or gall bladder removal, using a Da Vinci XI Robot Surgical System on a Sri Lankan citizen. This surgery marked the first time the Da Vinci Robot has been used on a live patient aboard a maritime vessel from any country.

“This was a historic moment for both Sri Lanka and all the partner nations participating in PP18,” said Lt. Cmdr. Kyle Gadbois, director of surgical services aboard Mercy who is a native of Mukilteo, Washington. “Not only was this the first time the Da Vinci XI Surgical System has been used on a patient while aboard a ship, but it also marked the first robotic-assisted surgery to be conducted in Sri Lanka. It was an exciting experience and I am thankful for the opportunity to have been a part of this ground-breaking moment for the surgical field.”

Prior to the actual surgery on May 4, Gadbois along with Dr. Vyramuthu Varanitharan, a general surgeon at Base Hospital Mutur, and Cmdr. Tamara Worlton, a surgeon from Walter Reed National Military Medical Center assigned to Mercy for PP18, ran through simulation exercises using the Da Vinci XI Surgical System on a mock patient and finalized surgical plans as a team.

“This surgery took a lot of planning before we actually performed it aboard the Mercy,” said Worlton. “Dr. Varanitharan was kind enough to prescreen possible candidates prior to the Mercy’s arrival to Sri Lanka.”

On May 28, the team selected a patient who needed a cholecystectomy and was willing to have a robotic-assisted surgery performed. According to Worlton, all the preparation and collaboration put into planning before the operation paid off and the entire surgery was completed in a smooth and routine manner.

“I believe the surgery was a success because of the continuous collaboration between our partner nations’ medical staff prior to the surgery where we discussed different surgical techniques the different countries do and how it could be incorporated into the surgery.”

The surgery marked an additional first for Dr. Varanitharan, as this was also the first surgery he has conducted aboard a ship during his entire medical career.

“This was the first time I have ever operated aboard a ship before and it surprised me,” said Varanitharan. “It is very stable and doesn’t move around. It felt as if I was doing surgery in an operating room in a hospital. It was a fantastic experience to have been able to do surgery on a hospital ship and it is something my team and I will never forget.”

After the surgery was successfully completed, the patient was transferred to the Mercy’s post anesthesia care unit to recover and was later discharged from the ship in excellent condition for her routine post-operative follow up care by Varanitharan.

USNS Mercy made previous stops in the 2018 mission in Bengkulu, Indonesia and Kuala Lumpur, Malaysia, and are currently in Trincomalee, Sri Lanka. After departing Sri Lanka, USNS Mercy will make mission stops in Vietnam and Japan strengthening alliances, partnerships, and multilateral cooperation throughout the Indo-Pacific region.