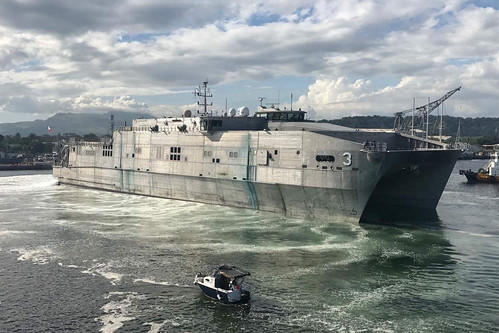 The 7th Fleet team, consisting of more than 40 service members including the U.S. 7th Fleet band and Fleet Anti-terrorism Security Team Pacific (FASTPAC) Marines, have already been to Singapore and Malaysia, where they participated in flag-level staff talks, community relations projects and a number of band engagements and receptions aimed at enhancing relationships and partnerships throughout the Indo-Pacific and demonstrating 7th Fleet's commitment to the region.

"The long-standing alliance between the Philippines and the United States has contributed to peace, stability and prosperity in the Indo Pacific region for more than 60 years," said Dodgen. "Our discussions with the Republic of the Philippines continue to focus on strengthening our alliance through increased interoperability and capabilities. I hope my brief interactions with a variety of community and military leaders here in Puerto Princesa will be the beginnings of fruitful relationships."

Capt. Bernie Wang, the 7th Fleet plans and theater security cooperation director, said every port visit thus far has been positive, and interactions with host countries have demonstrated the strength of our alliances in the Indo-Pacific.

"The Philippines played a crucial part in U.S. naval history," said Wang. Our alliance is built on a strong foundation of shared values and sacrifices, and we look forward to doing our part here in Puerto Princesa to contribute to that relationship and partnership. I believe the key to our success is a dedicated group of core staff and their ability to bring people together in a focused effort."

Seventh Fleet assets have had regular engagements with their Filipino counterparts for decades, participating in exercises such as Pacific Partnership, Balikatan and MTA Sama Sama, supporting counter-piracy and antiterrorism missions, completing construction projects, delivering humanitarian assistance and disaster relief supplies and making port calls in several cities in the Philippines.

Seventh Fleet, which celebrated its 75th year in 2018, spans more than 124 million square kilometers, stretching from the International Date Line to the India/Pakistan border; and from the Kuril Islands in the North to the Antarctic in the South. Seventh Fleet's area of operation encompasses 36 maritime countries and 50 percent of the world's population with between 50-70 U.S. ships and submarines, 140 aircraft, and approximately 20,000 Sailors in the 7th Fleet.