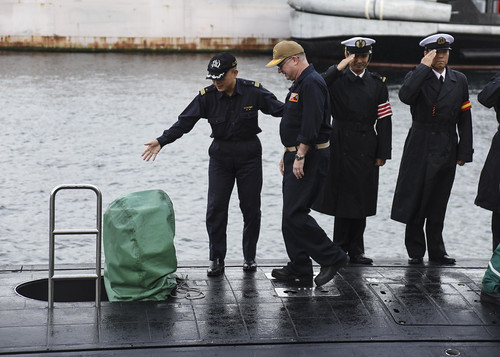 YOKOSUKA, Japan - Rear Adm. Jimmy Pitts, commander of Submarine Group 7, got underway with the Japan Maritime Self-Defense Force submarine JS Seiryū (SS-509) at the end of October for a familiarity cruise and to reinforce the submarine group’s commitment to the U.S.-Japan alliance.

Seiryū is the newest Sōryū-class submarine assigned to JMSDF’s Submarine Flotilla 2, based in Yokosuka. Sōryū -class submarines are the world's largest conventionally-powered submarines. According to JMSDF public releases, they have an excellent operational track record and are equipped with state-of-the art technologies, including air-independent propulsion (AIP) systems that enable them to remain fully submerged for long periods of time, and advanced stealth technologies that make them more difficult to detect.

"Our national defense strategy reinforces the continued need to strengthen partnerships and alliances through regular joint training and interaction,” said Pitts, who hosted Takashima earlier this month for an office call. Pitts also visited the JMSDF Submarine Training Command in Kure and attended the launch of Oryū, the JMSDF’s 11th Sōryū -class submarine and the first to be powered by lithium-ion batteries.

“We share a very close relationship with the Japan Maritime Self-Defense Force Fleet Submarine Force. Whether cruising the deep aboard one of the newest Japanese submarines, exchanging office calls, coordinating submarine operations and exercises, or sharing in the excitement of a submarine launch, the Fleet Submarine Force has been a strong friend and partner."

"We are very pleased to have Rear Adm. Pitts aboard our submarine,” said Cmdr. Takehiko Hirama, commanding officer of Seiryū. “We are excited to show our capability and tactics to increase our interoperability and mutual understanding."

Submarine Group 7 safely and securely conducts persistent undersea warfare and anti-submarine warfare operations in the 5th and 7th Fleet areas of responsibility covering nearly half of the Earth's surface.