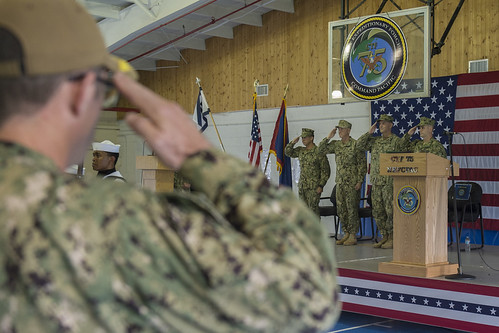 The official party salutes as the national anthem plays during the CTF 75 change of command ceremony. (U.S. Navy/MC2 Kory Alsberry)

Rear Adm. Brian Brakke, commander of Navy Expeditionary Combat Command (NECC), presided over the ceremony and praised Baughman for his excellence in leading the CTF 75 team of over 1,200 expeditionary Sailors and welcomed his successor.

“The Navy expeditionary combat force is known for its dedicated men and woman who bring a diverse set of specialized capabilities to the Navy team,” said Brakke. “During each visit to Guam, I witnessed his (Baughman) leadership and vision, place Navy expeditionary forces on a trajectory to bring our combat power and fighting power to the forefront of this region.”

In addition to exercise support, Baughman led the U.S. Navy through its first ever partnership with Sri Lanka during Cooperation Afloat Readiness and Training (CARAT) 2018.

“This milestone event now serves as another chapter in the history of the U.S. Navy’s Indo-Asia Pacific activity,” said Brakke. “A history of multinational partnerships that has maintained regional stability and security for more than 70 years.”

Baughman was grateful of his opportunity to lead CTF 75.

“It is truly inspiring to witness the incredible level of competence and professionalism that these men and women at CTF 75 display on a daily basis to get that job done, regardless of the challenge,” said Baughman. “As we face great power competition and ever changing threats in the theater, there is no other force that is more prepared to take this on, and it is primarily due to the hard work of the leadership in front of you, and their tactical units of action.”

Upon assuming command, Correll wanted to make it clear the mission of CTF 75 has not changed.

“The mission is the same,” said Correll. “We will continue to exercise operational control of the assigned and attached forces of CTF 75.”

CTF 75 is the primary expeditionary task force responsible for the planning and execution of coastal riverine operations, explosive ordnance disposal, diving engineering and construction, and underwater construction in the U.S. 7th Fleet area of operations.