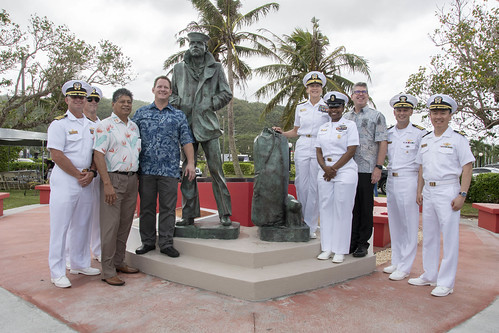 Leadership from Joint Region Marianas and U.S. Naval Base Guam, the government of Guam and the U.S. Navy Memorial gather for a photo after an unveiling ceremony for the Lone Sailor statue. (U.S. Navy/JoAnna Delfin)

ASAN, Guam - Standing at 7 feet tall and gazing toward the Pacific Ocean, the Lone Sailor statue was unveiled during a ceremony at the Ricardo J. Bordallo Governor's Complex in Hagatna, Guam, Dec. 15.

The effort to place a statue on island was an initiative of the Vietnamese-American community and the U.S. Navy Memorial to demonstrate the special relationship between the Navy, the sea services, Guam and thousands of Vietnamese citizens who found refuge in Guam in the closing days of the Vietnam War during Operation New Life.

“This is where they came through, 111,000 of them,” said retired Rear Adm. Frank Thorp, president and CEO of the U.S. Navy Memorial. “The Lone Sailor will stand proudly and will represent for those people every man and woman who has served in the Navy, who serves in the Navy today or who will serve in the future.”

Guam's Lone Sailor is the western-most in the nation and is the 16th installed by the organization.

“This Lone Sailor will stand the watch at Adelup,” said Rear Adm. Shoshana Chatfield, commander, Joint Region Marianas. “(It) looks out to that very important point where the Pacific Ocean meets the Philippine Sea, where great battles were generated, and great victories won on behalf of freedom; and the free and open Indo-Pacific that we cherish has its defense here on Guam.”

As one of many memorials at the governor's complex, the Lone Sailor stands alongside the Guam Seal and is surrounded by 19 benches that represent each village in Guam.

Guam Lt. Gov. Ray Tenorio expressed his appreciation to the Navy Memorial and the Navy for their partnership and touched upon the military's important relationship to the people of Guam.

“They're going to look at that Lone Sailor and they're going to be proud of what they see here,” he said. “Every person has served in the military one way or another (and) has had the benefit of the United States Navy.”