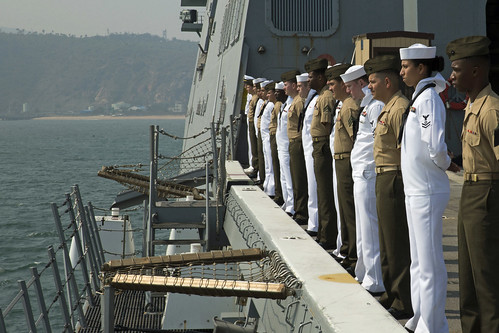 During the visit, Sailors and Marines will hold professional exchanges with their Indian Navy counterparts and have opportunities to explore the local area while on liberty over the holiday season.

“It is an honor to welcome to India the captain and crew of the USS Anchorage. I would like to express my gratitude and the thanks of the U.S. Mission in India for the service of our Sailors and Marines, who are serving far from home this holiday season,” said Hadda.

India and the United States are global partners on defense and security, committed to assuring a free and open Indo-Pacific. Anchorage’s port visit to Visakhapatnam, and Dec. 12 visit by Vice Adm. Phil Sawyer, commander of U.S. 7th Fleet to New Delhi, are the latest examples of a growing naval partnership.

“The engagement of the U.S. Seventh Fleet both with India and with this region of India is a positive development,” said Hadda. “The United States, through our Consulate General in Hyderabad, has worked for ten years now to build up partnerships in Andhra Pradesh and across the district we serve, and we are proud that the first port-of-call for the USS Anchorage in India is here in Vizag.”

“Our Navy and Marine Corps team is deeply committed to strengthening our partnership with the Indian Navy,” said Cooper. “We are proud of the tremendous work that American Sailors and Marines are doing alongside their Indian teammates, providing security across a free and open Indo-Pacific.”

Capt. Dennis Jacko, commanding officer of Anchorage, said Sailors and Marines are focused on the value of exchanges and representing America while in India.

These capabilities serve to support surrounding nations as well as sending a signal of strength to nations that endorse expansionism and ignorance of international law.”

During the visit, more than 100 Indian distinguished visitors, naval officers and sailors, as well as 25 local students will tour Anchorage to learn about the ship’s amphibious capabilities.

Additionally, Sailors and Marines will conduct subject-matter expert exchanges on humanitarian aid and disaster relief as well as maritime logistics.

Jacko also emphasized the subject-matter expert exchanges that will occur during the visit. “The Anchorage’s Sailors and Marines have been deployed since July and have honed their war fighting skills to a fine edge. We have a lot of experience to offer as well as learn from during this engagement.”

In addition to the professional exchanges, Sailors and Marines will take part in sporting events, including cricket and kabaddi.

The port visit wraps up a busy year for both navies. At sea replenishments continued as part of the bilateral Logistics Exchange Memorandum of Association (LEMOA). In June, exercise Malabar was held off the coast of Guam, joined for the second time by the Japan Maritime Self-Defense Force (JMSDF). Malabar was followed by the Indian Navy’s participation in exercise Rim of the Pacific (RIMPAC) this summer off the Hawaiian Islands. In October, members of U.S. Navy P-8A and Indian Navy P-8I maritime patrol aircraft squadrons held a professional exchange in Goa, India.

Anchorage, which is part of the Essex Amphibious Ready Group (ARG), and the 13th MEU are deployed to the 7th fleet area of operations to support regional stability, reassure partners and allies and maintain a presence postured to respond to any crisis ranging from humanitarian assistance to contingency operations. 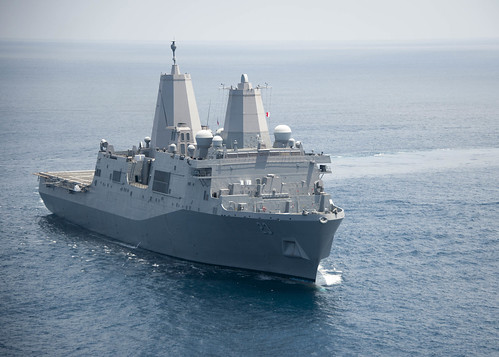