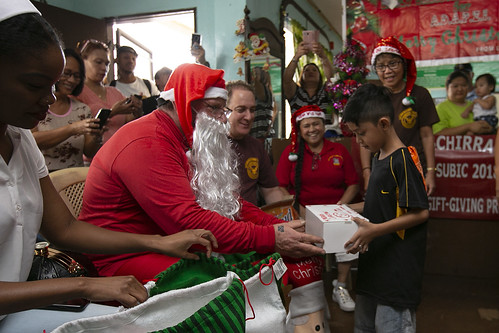 The combined team of about 30 members visited three sites: Foundation for Differently-Abled Persons (FDAP), the girls’ annex of the Social Development Center (SDC), and the boys’ annex of the SDC.

“We truly had meaningful interactions with these organizations in Olongapo,” said Navy Lt. Eric R. Bryan, chaplain, MSC Far East. “We partnered with the Philippine Navy, bridged the cultures of our teams with the local community where we work, and had the opportunity to get to know the people of the city and the organizations doing tremendous work.”

Featured with a civilian mariner ‘Santa Clause’, Wally Schirra volunteers and seven Filipino Sailors from the BRP Andrés Bonifacio, the team distributed donations, danced and sang with kids, shared a meal, and played a friendly game of basketball at the COMREL sites.

“Whenever we partner together, such as with the U.S. Navy, we are showing a united front in these community relations activities,” said Philippine Navy Lt. Junel Udtohah, operations officer, BRP Andrés Bonifacio. “Rather than doing separate events, joint and combined COMRELs make the activities more significant. We are making a bigger impact.”

At the FDAP, volunteers from the ships were also treated to song (through sign language) and dance performances by kids, which then turned into a group dance that involved the audience. At the girls’ center some of the kids sang songs and at the boys’ center, the crew played a friendly game of basketball with a group of talented and energetic boys.

“Every time we visit a port, we look for opportunities to work with the less fortunate and help the community even though we are always busy with missions,” said civilian mariner Victoria Somocol, a junior supply officer on USNS Wally Schirra. “We like to expose the crew to other cultures as well. In return, we gain friends within the local community that we’re visiting.”

Somocol, a 16-year veteran of MSC from Dededo, Guam, served as the lead organizer for the Wally Schirra.

“I ask the crew for donations and I consolidate them,” said Somocol. “This time, since it was Christmas season, everyone was excited and motivated to donate.”

Before arriving to a country that will afford the crew an opportunity to participate in a comrel, Somocol coordinates with local liaisons that assist with communication between the organizations.

“We are so glad the U.S. and Philippine navies visited us,” said Emilia Sanchez, president of FDAP. “The regular visits are a big boost to kids’ morale. When the kids can talk and eat with the visitors, they are happy and they are building their confidence to communicate. In fact, when a few months go by with no visitors, they are asking why, and when will the Navy visit them again.”

According to Sanchez, the interaction by an outside group is very beneficial to the kids’ development. The FDAP provides education, food and some logistics support to about 32 kids who have hearing and speaking disabilities.

“I was very happy with the outcome of these COMRELs,” added Somocol. “It’s hard being away from loved ones when you are underway at sea or in other countries doing your job, but having a great team like the one on the Wally Schirra really makes it easier.”

The USNS Wally Schirra is currently operating in the U.S. Navy 7th Fleet area of responsibility and was on a routine port visit to the Philippines.