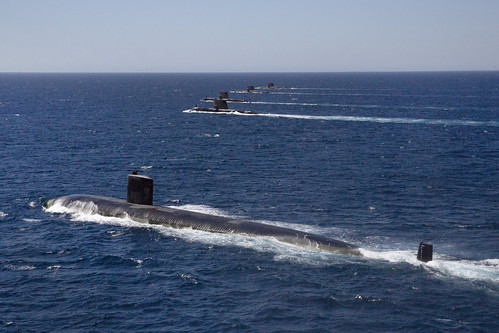 Santa Fe’s visit followed the completion of a joint training exercise with four Royal Australian Navy Collins-class submarines, HMAS Collins, HMAS Farncomb, HMAS Dechaineux and HMAS Sheean, in waters around Australia. The exercise, which was designed to enhance anti-submarine warfare abilities, gave the crews of both navies the opportunity to employ and experiment with real world tactics. Pulling into port, however, gave the crews the opportunity to meet each other face-to-face and forge greater ties.

"Australia is one of our closest allies in the Pacific, and the friendship between our navies underpins a free and open Indo-Pacific,” said Cmdr. Christopher Hedrick, USS Santa Fe commanding officer. “Visiting HMAS Stirling gives me and my crew the opportunity to do our part to strengthen that relationship.”

During their port visit, Santa Fe will have the opportunity to give tours to local dignitaries and media, engage in a series of COMRELs and get some well-deserved rest and relaxation.

“We are very thankful to our hosts for the support of the community in Stirling," said Hedrick. "I look forward to welcoming our Australian friends on board and I'm certain that our time here will create memories that will last a lifetime."

“The people of Australia, military and civilian, have made us feel welcome before we even entered port,” said Sonar Technician (Submarine) 1st Class Alen Lelevier. "We will always cherish the relationships that we have established and the bonds that have been strengthened during our time here in Australia. It has been a truly positive experience working with one of our greatest and long-standing allies."

For many crewmembers, this is their first time visiting Australia, and the opportunity to visit some of the iconic sites in Stirling excited them the most. “We have a crew that works hard at their jobs and have tackled several hurdles to get here,” said Master Chief Sonar Technician (Submarine) James McGarrah, Santa Fe’s Chief of the Boat. “They understand the importance of our mission, and they get after it every day. But I’d be lying if I didn’t say a port visit to Australia has given us a little extra motivation to focus and execute this week!"

"I can’t wait check out some local historical sites like Fremantle Prison," said Electronics Technician (Nuclear) 2nd Class Tashon Roberts. "If I can make it to Cappuccino Strip and hike Waterfall Gully, it will be the pinnacle of my trip!”