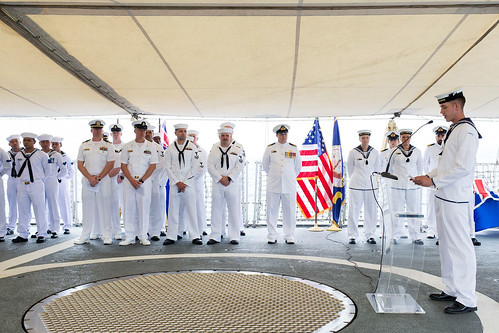 The ceremony honored American and Australian crews who lost their lives fighting aboard USS Houston (CA 30) and HMAS Perth (D 29) during the WWII battle.

“It is important to remember the sacrifice of the Sailors that have gone before us to pay tribute to shipmates who have made the ultimate commitment while personifying the essence of duty,” said Lt. Cmdr. Fred Crayton, commanding officer of Chief. “It is events like the commemoration of the Battle of Sunda Straight that captures the fighting spirit and significance of Sailors who chose obligation over existence. These were heroes that embodied honor, courage, and commitment and who should always be remembered.”

In the early morning of March 1, 1942, the cruisers Houston and Perth were sunk by the Japanese Imperial Navy in the Sunda Strait, about 60 nautical miles from Jakarta, Indonesia. During the battle, in which both ships fought to the last of their fuel and ammunition, 696 U.S. Sailors and Marines aboard Houston and 375 Australian sailors aboard Perth, including the captains of both ships, lost their lives. Both wrecks remain in their final resting places as war graves beneath the sea.

During the transit aboard Kri Usman Harun, sailors from the United States, Australia and Indonesia shared experiences at sea.

“It was a very heartfelt ceremony that provided me a unique experience,” said Electrician’s Mate 2nd Class Khristofer Dickover, who sung the National Anthem during the ceremony. “I love honoring my country and I’ll take any opportunity to do just that.”

Ambassador Joseph Donovan Jr., U.S. Ambassador to Indonesia, spoke about the importance of the U.S.-Indonesian partnership.

“The United States is proud to be celebrating 70 years of diplomatic ties in Indonesia,” said Donovan during the ceremony. “And a strategic partnership built on the foundation of shared democratic values and common interest.”

Chief, part of Mine Countermeasures Squadron 7, is operating in the Indo-Pacific region to enhance interoperability with partners and serve as a ready-response platform for contingency operations. 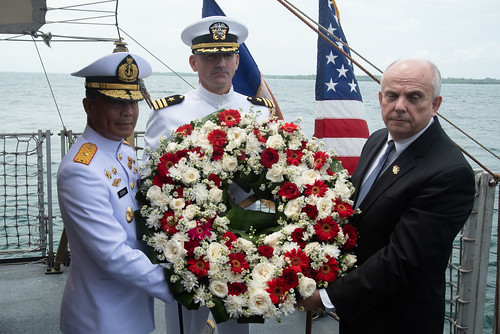