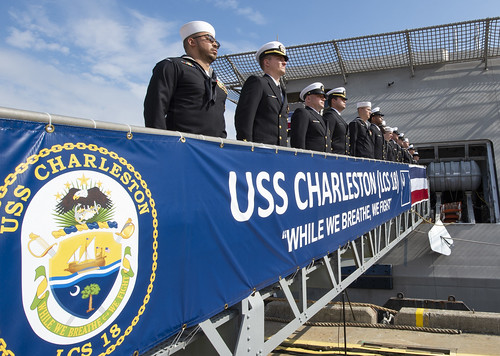 CHARLESTON, S.C. - As clouds passed overhead, shipboard alarms echoed across the Cooper River and the crew of USS Charleston (LCS 18) ran aboard their ship and brought her to life. More than 5,000 guests gathered at the Columbus Street Terminal in the ship’s namesake city, officially welcoming the U.S. Navy’s newest littoral combat ship into the fleet.

LCS 18 is the 16th littoral combat ship to enter the fleet and the ninth of the Independence variant. The ship is the sixth to be named after Charleston, South Carolina, to honor a long history, from the decades of work at the Charleston Naval Shipyard to Charleston Marine Container, Inc., building mission modules for the littoral combat ship program today.

Charleston Mayor John T. Tecklenburg welcomed the audience to the commissioning of what he identified as a symbol of the city of Charleston. Tecklenburg added that since the founding of Charleston almost 350 years ago, the sea has been part of the Holy’s City’s economy and culture.

“The sea is history,” said Tecklenburg. “Nowhere will you find a people who understand those words more fully than the people of Charleston.”

In honoring the state of its namesake city, LCS 18 adopted South Carolina’s motto – As I Breathe, I Hope – and made it its own adding a combative twist – As We Breathe, We Fight!

Rear Adm. John Neagley, program executive officer for unmanned and small ships, spoke of the fighting power of LCS 18, the final ship commissioning Neagley will oversee as a Navy officer.

“If called upon, she’ll be ready to fight and win,” said Neagley. “She is a lethal ship.”

But he saved his greatest charge for Charleston’s crew.

“This ship was made to defend America,” said Foggo. “Take care of her, so you in turn can take care of all of us.”

Secretary of the Navy, Richard V. Spencer, reflected on the importance of the ship to the Navy mission and the changes ahead. He said USS Charleston contributes to giving the American people “the Navy the nation needs.”

Spencer added that cooperation with industry and production were two key elements to deliver the changes needed in the Navy, such as more powerful ships like LCS 18.

He recognized South Carolina Sen. Tim Scott for his contributions as a fellow leader in the ship’s commissioning, and as an impactful representative for the state.

Scott delivered the commissioning ceremony's principal address for the ship named after the state’s oldest and largest city.

“There is a reason more than 40 ships have been named for South Carolina, whether it’s our places or our people,” said Scott. “It’s because so many South Carolinians have been dedicated to making sure that America remains the safest nation on Earth.”

Scott spoke about the magnitude of LCS 18 referring to it as a “freak of nature added to the Navy” referring the ship’s frightful strength and agility.

“USS Charleston has the ability to tackle asymmetrical threats like mines, quiet diesel submarines, and at the same time, fast surface ships,” said Scott. “We have been blessed to have our Charleston defending this nation.”

Soon after these words from South Carolina’s Senator and the setting of the ship’s commissioning by Spencer, Cmdr. Christopher K. Busca, USS Charleston’s commanding officer, gave Cmdr. James H. Hoey, the ship’s executive officer, orders to hoist the ship’s colors and commissioning pennant. His orders to command the ship followed.

Next, the traditional setting of the first watch was ordered by former Charleston mayor Joseph P. Riley Jr. After 10 consecutive terms leading the Holy City, Riley is one of the longest serving mayors in the United States. He and his wife Charlotte, who serves as the ship’s sponsor, maintain strong ties in the Lowcountry.

Mrs. Riley christened the future USS Charleston on Aug. 26, 2017, during a ceremony at the Austal shipbuilding facility in Mobile, Alabama. She was also in her hometown of Charleston for this ceremony to give the order to “man our ship and bring her to life!”

Since her christening, Charleston demonstrated a culture of excellence when she completed her New Construction Light Off Assessment (LOA) in three-and-a-half days, half the time allotted for the visit. LOA is an assessment which ensures the ship is able to safely light-off and operate its engineering plant both in port and at sea. The ship accomplished more than 70 percent of her material checks in the two weeks leading up to the LOA, which greatly facilitated that early completion.

Busca, recognized his success as a leader is predicated on the foundation of support, vision, and teamwork built with his crew as they worked toward this milestone. He said the crew seemed to never lose their positive attitude. They strived for excellence in all assessments and chose to prove that excellence in all areas, even when it meant staying late to do so.

“It didn’t take long to know that there was something special. They had an infectious attitude that seemed to never end,” said Busca. “I am a proud captain."

Falling in line with his pride as their leader, Busca added a surprise element to the commissioning ceremony calling one of his crew to the stage. Electronics Technician 1st Class Jeremiah Hughey, from Biloxi, Mississippi, was meritoriously promoted to the rank of first class petty officer during the ceremony.

Busca did not hold back on calling out the contributions his multifaceted crew makes to the success of the ship.

The 74 Sailors aboard come from places like Jamaica, Costa Rica, Mexico, China, Haiti and the Philippines, just to name a few. The education on deck included the ship’s chief engineer with a PhD. and a chief quartermaster with a Master’s degree from Harvard. Busca pointed out that this diversity makes them special and the solidarity as one team under the same flag is what makes the crew of LCS 18 so powerful against any threat.

In closing, he had these words for any threat contemplating hostile action.

“I will bring up all four engines online, come to full power, and steam right at you with that gun blazing and my eventual missiles launching. Charleston will not turn and run. We will not run because while we breathe, we fight!”

After the ceremony, the ship will transit to join Littoral Combat Ship Squadron 1 and ten other littoral combat ships currently homeported at Naval Base San Diego.

The littoral combat ship is a fast, agile, mission-focused platform designed to operate in near-shore environments, while capable of open-ocean tasking and winning against 21st-century coastal threats such as submarines, mines, and swarming small craft. They are capable of supporting forward presence, maritime security, sea control and deterrence. 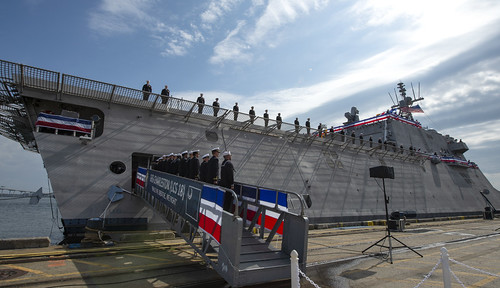 The crew of the Navy's newest littoral combat ship, USS Charleston (LCS 18), mans the rails and brings the ship to life during the ship’s commissioning ceremony. (U.S. Navy/MC2 Natalia Murillo)