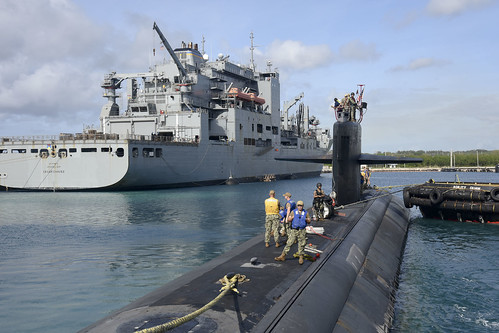 The demonstration, which involved Oklahoma City mooring alongside Cesar Chavez was a first between a U.S. submarine and a dry cargo class ship. Dry cargo class ships routinely provide logistic lifts to deliver cargo (ammunition, food, limited quantities of fuel, repair parts and ship store items) to U.S. and allied ships at sea. The demonstration was completed to show that a submarine could safely go alongside a dry cargo class ship, which could facilitate the transfer of weapons, stores, critical repair parts, and provide the ability to support crew rest.

“Eventually we hope to expand on the demonstration to include large equipment transfers and parts,” said Lt. Cmdr. Andy Valerius, the logistics demo planner. “The ability to moor alongside a supply ship is a critical capability. If we could get parts and food stores from a dry cargo ship, it would reduce our dependence on our two submarine tenders, create significant cost savings and greatly enhance our ability to operate for a longer period of time away from major ports.”

“We frequently have to sacrifice opportunities for engagement with our allies and partners because of our inability to pull into a nearby port,” said Cmdr. Steven Lawrence, commanding officer of Oklahoma City. “I am hopeful that this demonstration, which in the years to come will prove that submarines can be replenished at sea just like any other warship, will lead to more bilateral engagements with regional allies and partners and facilitate the ability of submarines to complete war and peace time missions.”

Oklahoma City is one of four Los Angeles-class attack submarines assigned to Commander, Submarine Squadron Fifteen, which is located at Polaris Point, Naval Base Guam in Apra Harbor, Guam. Also based out of Naval Base Guam are submarine tenders USS Frank Cable (AS 40) and USS Emory S. Land (AS 39). The submarines and tenders are maintained as part of the U.S. Navy's forward-deployed submarine force and are readily capable of meeting global operational requirements.

In the Navy and interested in taking orders to Guam? Want to learn more about the duty station and life on the island? For more information, check out the ‘Go Guam!’ website and download the ‘1st Fifteen’ checklist. 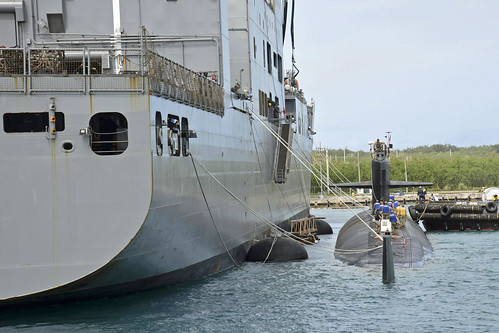