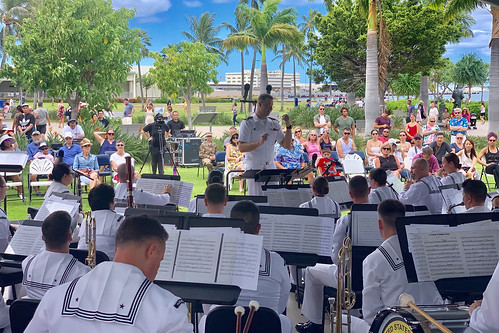 PEARL HARBOR - The U.S. Pacific Fleet Band honored Sailors who served in the Pacific during World War II in a concert at the Pearl Harbor National Memorial, Aug. 22.

The band performed a wide range of selections including music preserved from that era. The tribute also honored the famous 'Battle of Music' held at Pearl Harbor on Dec. 6, 1941.

Planners respected the fundamental elements of what a concert at Pearl Harbor was like in the early 1940s. One such example was performing the national anthem at the end of the program.

The music payed homage to what Navy bands on ships in Pearl Harbor played during that era. One such ship with a band, well known to visitors to the Pearl Harbor National Memorial, was the USS Nevada. During the attack the ship got underway and fought her way down the channel, drawing significant enemy attention and fire that would have perhaps otherwise gone to critical targets including strategic fuel reserves and docking facilities for ship repair. To prevent blocking the channel, the ship was run aground after suffering significant damage.

"Nevada survived to sail again, and fulfilled a crucial role in Operation Neptune, serving as the flagship for the Normandy D-Day assault, giving her distinction as the only ship present at both Pearl Harbor on December 7, 1941 and at Normandy on June 6, 1944," said Lt. Kelly Cartwright, the U.S. Pacific Fleet bandmaster. The band then played music from the USS Nevada library.

The throngs of visitors at the memorial and embarking boats out to see the Arizona Memorial, were treated to complete immersion in the music of the day. Dozens took seats and enjoyed the concert, while hundreds more joined the concert via the internet.

"We had people come up after the concert who had been in the Indian Army, New Zealand Army, Vietnam Army," said Ensign David A. Harbuziuk, the operations officer for the U.S. Pacific Fleet Band. "We also had audience members from Italy and Japan. A former Navy musician from the Brooklyn Navy Band was in the audience."

Concert goers were treated to a performance that tied the heroic naval efforts of World War II to operations in the region now. One such example was framed by the music of USS Idaho.

USS Idaho arrived with the battle fleet at Pearl Harbor in 1940, and participated in the invasion of the Marshall Islands in 1943. A mere six months ago, members of U.S. Pacific Fleet Band joined musicians from the Japan Maritime Self-Defense Force in the Marshall Islands to support the annual Pacific Partnership mission.

"While there in the same place where Sailors and Marines from our countries once fought fiercely and valiantly as enemies, we were able to join as partners in music to honor the memories of those who gave their lives in service," Harbuziuk said.

Another selection was from the music library of the USS Minneapolis. On the morning of Dec. 7, 1941, the Minneapolis was 20 miles out to sea off Pearl Harbor conducting gunnery practice. Minneapolis went on to take part in some of the most important battles of the war in the Pacific including the Battle of Coral Sea, the Battle of Midway and the landings at Guadalcanal.

She also fought in the Battle of Leyte Gulf, which was the largest sea battle in history. Her crew earned an astounding 16 battle stars for service in WWII.

"Our Navy will soon commemorate the 75th anniversary of the Battle of Leyte Gulf, which serves as a reminder that for three-quarters of a century, our Pacific Fleet Sailors have remained forward and ready, preserving peace and stability for a free and open Indo Pacific," Harbuziuk added.

"We also found many ties to our Navy today," said Lt. j.g. Matt Shea, the assistance fleet bandmaster. "One of our Sailors was recently selected for chief petty officer and it was fascinating to learn that an assignment as leader of a ship's band typically resulted in selection for chief. Leading one of these bands was a way for them to prove they were ready just as CPO selectees across the world are doing right now."

Honoring naval heritage is important to Sailors. Perhaps no ship in Pearl Harbor better identifies with Navy band members than the USS Arizona herself.

On the night of Dec. 6, 1941, there was a band competition called the 'Battle of Music' at Bloch Arena on Naval Station Pearl Harbor, featuring Navy bands from ships homeported in Pearl Harbor and attached to shore installations in Hawaii.

The USS Arizona band had already won the first round Sept. 13, 1941, and was not scheduled to play again until the final competition.

During the elimination tournament on the evening of Dec. 6, bands from the USS Pennsylvania (BB 38), USS Tennessee (BB 43), USS Argonne (AG 31), and the submarine base competed against one another. Several members of the USS Arizona band attended the contest to see their upcoming competition and to visit with School of Music shipmates in the Tennessee band.

On the morning of Dec. 7, 1941, while the band from the USS Nevada (BB 36) played morning colors, the surprise attack on Pearl Harbor started. The entire USS Arizona Band, while at battle stations passing ammunition under gun turret number one, was killed in the attack. In the weeks to follow, all the bands that had participated in the 'Battle of Music' voted to posthumously award the tournament trophy to the USS Arizona Band, and renamed it the 'Arizona Trophy.'

That very trophy is on display at the Pearl Harbor National Memorial visitor's center.

Interestingly, the concert included music from the libraries of two of the ship's bands who were beaten that day by USS Arizona: USS California and USS Dobbin.

Band members across the fleet understood the courage, determination and commitment necessary to win the war in the Pacific. They've been there in the Navy's darkest hours, and during its greatest triumphs.