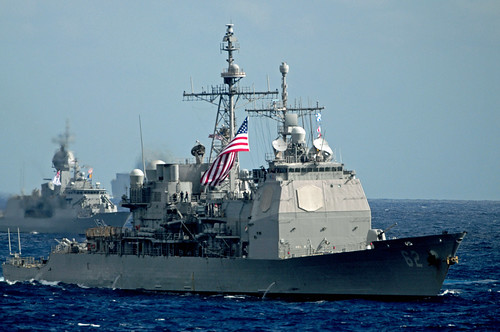 APRA HARBOR, Guam - Maritime forces from Australia, Canada, Republic of Korea, and the United States met in the waters off the coast of Guam, Nov. 20, to conduct cooperative maritime training in exercise Pacific Vanguard.

Pacific Vanguard brings together more than 1,500 Sailors from four Indo-Pacific nations to sharpen skills and strengthen practical cooperation at sea. The exercise takes place off the coast of Guam.

This iteration of Pacific Vanguard builds on the inaugural exercise that was first conducted in May.

"Building on the success of the previous exercise, Pacific Vanguard continues to serve as an opportunity for like-minded maritime nations to come together based on their shared values and common interests," said Vice Adm. Bill Merz, commander of U.S. 7th Fleet. "Our forces will use the next few days to exercise and improve our multilateral ability to adapt to ever changing regional challenges.”

During the exercise, forces will combine to practice a wide range of naval competencies including combined maneuvers, live-fire exercises, defensive counter-air operations, anti-submarine warfare, and replenishment at sea.

The Royal Canadian Navy joined this iteration of the exercise and sent the frigate HMCS Ottawa (FF 341).