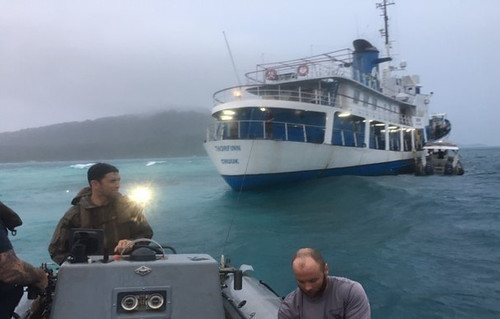 Civilian mariners from USNS Salvor (ARS 52) and U.S. Navy divers provide assistance to a vessel that had run aground in a storm. (U.S. Navy photo)

SINGAPORE - U.S. Navy divers and civilian mariners aboard the Military Sealift Command salvage ship USNS Salvor (ARS 52) rendered assistance to a Micronesian passenger ship that ran aground off the coast of Chuuk, Federated States of Micronesia, during a storm, Dec. 1.

USNS Salvor was in Chuuk’s Weno Harbor conducting salvage training, but got underway in response to distress calls from the SS Thorfinn, a charter vessel that had run aground on a reef in Chuuk Lagoon.

After ensuring the safety of Thorfinn’s crew, divers from the U.S. Navy’s Mobile Diving and Salvage Unit (MDSU) 1 worked with Salvor’s civilian mariners to free the distressed vessel and guide them to safe anchorage.

“It was a great example of what we can accomplish when we work together as a team," said Capt. Robert Williams, commodore of Military Sealift Command Far East. "Our civilian mariners and Navy divers were ready to respond when needed and worked seamlessly together to safely and professionally execute the rescue."

Salvor regularly conducts salvage, diving, towing, offshore firefighting, heavy-lift operations and theater security cooperation missions. It is one of only two rescue and salvage vessels in the MSC inventory and the only ship of its kind in the Far East.

“This is what we’re here for,” said Navy Diver 1st Class Derek Luedtke, leading petty officer of MDSU-1. “It’s an opportunity for us to use our training, but I think I can speak for the team when I say we were happy to be able to help people in need.”