From Joint Base Pearl Harbor-Hickam 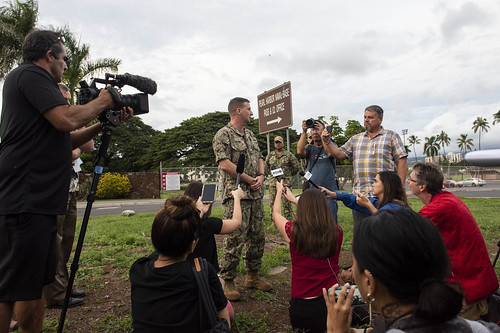 PEARL HARBOR - Joint Base Pearl Harbor-Hickam security forces responded to a reported shooting at a dry dock at Pearl Harbor Naval Shipyard, Dec. 4. Initial reports indicate the shooter and two shipyard civilian employees are deceased, and one shipyard civilian is in stable condition at a local hospital.

“We are saddened by this incident, and our thoughts and prayers are with the victims and their families,” said Rear Adm. Robert Chadwick, commander, Navy Region Hawaii. “The Pearl Harbor Naval Shipyard is a vital part of our Navy ohana, and we have generations of people, families, who work there. Our security forces are working closely with agencies investigating this incident, and we are making available counseling and other support to those who need it after this tragedy.”

The shooter has been identified as a male U.S. Navy Sailor assigned to the USS Columbia (SSN 771). The incident took place at approximately 2:30 p.m. in the vicinity of the shipyard’s Dry Docks 2 and 3. The base is no longer in lockdown.

Base security, Navy investigative services and other agencies are investigating the incident. The names of the victims will not be released until the next of kin have been notified.