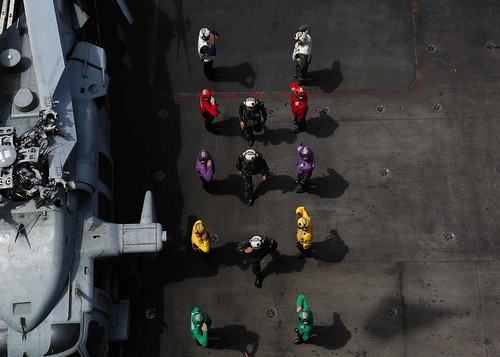 Top Thai military officials made an arrested landing aboard Abraham Lincoln following its safe transit of the Strait of Malacca. Building upon existing U.S.-Thai relations, the visit was an opportunity for the Thai to see U.S. Navy carrier operations firsthand.

The group was hosted by senior strike group leadership including Rear Adm. Michael E. Boyle, strike group commander, and the strike group’s warfare commanders. The group toured the ship, visiting the hangar bay and bridge, and observed flight operations from the flight deck.

“I think it is really reassuring to our Thai partners to know that if needed the U.S. Navy can be here in a hurry,” said Boyle. “They had really good questions about our capabilities, how quickly we could respond, and the maneuverability of a carrier strike group, like how a little over a week ago we were in the Middle East and now we are in South China Sea.”

One of the oldest and one of the most vital alliances in the region, the United States and Thailand established relations in 1818, signed a Treaty of Amity and Commerce in 1833, and became defense treaty allies in 1954 with the signing of the Manilla Pact. Today, as part of our mutual defense cooperation program, Thailand and the U.S. conduct an annual slate of more than 400 mil-mil exercises and engagements, covering all services of each nation.

“I spoke with the generals and admirals and told them that having them come out to see us is a reminder that together, with all of our partners and allies, we are much stronger,” said Boyle. “Today we showed our commitment to a key ally in this region.”

The Abraham Lincoln Carrier Strike Group is deployed to the U.S. 7th Fleet area of operations in support of security and stability in the Indo-Pacific region. With Abraham Lincoln as the flagship, deployed strike group assets include staffs and aircraft of CSG-12, Destroyer Squadron (DESRON) 2 and Carrier Air Wing (CVW) 7.