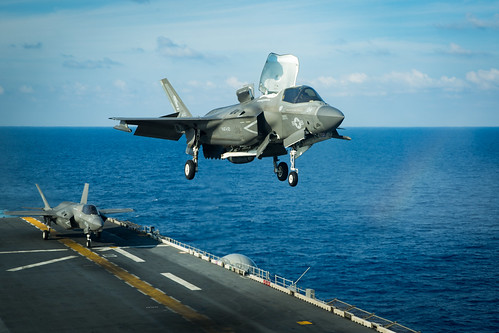 Over the course of daily flight operations, F-35Bs typically complete qualifications and mission rehearsals, with control support from Sailors and Marines aboard the America. The Navy-Marine Corps team ensures the Air Combat Element is primarily focused on Marine Air-Ground Task Force operations in support of ground and combat landing force missions, and defense of the amphibious task force, according to Col. Robert Brodie, commanding officer of the 31st MEU.

“Our F-35B’s multi-role fighter capability is a crucial component of the 31st MEU’s ability to rapidly deploy combat power in support of our Marine Air-Ground Task Force and naval integration throughout the Indo-Pacific region,” said Brodie. “While at sea, the Navy-Marine Corps team trains and develops a lethal force capable of accomplishing a full scope of military operations.”

“Marine Corps aviation is second to none, and America is proud to integrate with the ‘Dragons’ of VMM-265,” said Frost. “In the 31st MEU and the America Expeditionary Strike Group, you’ve got our Navy’s newest and most capable amphibious assault carrier forward deployed and partnered with the most lethal and effective air combat element the Marine Corps has ever fielded. Together, the Navy-Marine Corps team remains ready to operate freely, as international law permits.”

“This credible capability in the South China Sea demonstrates our enduring seven-decade commitment to the prosperity and security of the Indo-Pacific,” said Frost.

Expeditionary Strike Group 7 and the 31st MEU forward-deployed in Okinawa, Japan, continuously operate together to accomplish a wide variety of training missions and real-world operations throughout the region, according to Rear Adm. Fred Kacher, commander of ESG-7.

"The USS America-31st MEU, in the truest sense, embodies what our Chief of Naval Operations describes as integrated American naval power," said Kacher. “Whether launching strikes with the F-35Bs or landing a raid force using the MV-22B Ospreys, they are all launched from the most advanced amphibious aircraft carrier in the world and no one else can field that kind of versatile combat power. Together we are a truly exceptional fighting force."

America, flagship of the America Expeditionary Strike Group, 31st MEU team, is operating in the U.S. 7th Fleet area of operations to enhance interoperability with allies and partners and serve as a ready response force to defend peace and stability in the Indo-Pacific region. 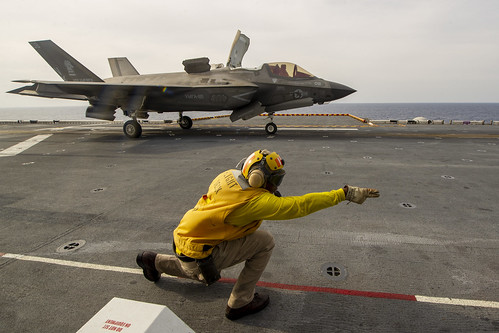