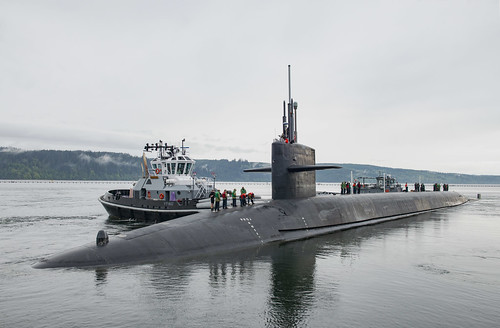 SILVERDALE, Wash. - The gold crew of the Ohio-class ballistic-missile submarine USS Maine (SSBN 741) officially returned the boat to strategic service, when they recently deployed on their first patrol in more than three years.

2020 marks USS Maine's 25th anniversary since commissioning and it is also the state of Maine's bicentennial.

"As Governor of the great State of Maine, and as a proud daughter and sister of Navy veterans, I am deeply grateful to the crew of USS Maine and to all those who have committed themselves to her continued service over the last twenty-five years," said Governor Janet Mills. "As Maine celebrates our bicentennial in what has been a challenging year, you carry forward our proud legacy of service and sacrifice in defense of our state and nation. As USS Maine returns to her sisters in the fleet, I wish you all fair winds and following seas, and thank you on behalf of our state for your many contributions to our nation."

"It is a neat experience to be part of a boat with so much history," said Electronics Technician (Navigation) 2nd Class Noah Oser, from Cleves, Ohio. "Themes like 'Remember the Maine' and the state motto "Dirigo,' Latin for 'I Lead,' are battle cries for the ship and have helped get us to this point."

Maine's three-year break in service involved an engineered refueling overhaul, estimated to extend the life of the ship by 20 years.

"These ships were not originally design to last much beyond 25 years," said Machinist's Mate (Auxiliary) 1st Class Cole Elliott, from Liberty Hill, Texas. "I'm proud to be a part of the second chapter of Maine's life."

Several exercises and inspections, including a successful missile test launch in February 2020, known as Demonstration and Shakedown Operation 30, all led up to Maine's official return to the fleet and her mission of supporting the sea-based leg of the U.S. nuclear triad.

"I could not be more proud of the efforts of every individual who is currently serving or has served aboard USS Maine during this period," said Cmdr. Rob Garis, commanding officer, USS Maine (Gold). "Their contributions are the reason USS Maine is once again ready to serve the nation and provide strategic deterrence."

Restoring Maine did not come without its challenges, especially since a majority of the crew had only operated the submarine in the dry dock, in addition to having to teach crew members to operate entirely new systems.

"Stripping down one of the most complex machines ever built and then getting to watch our Sailors bring it back to life was amazing; they took on the challenge and excelled, "said Chief Logistics Specialist (Submarines) Joel Dimarzo. "This is my second tour on Maine, and I've never been so proud or experienced such a sense of heritage as I have on this ship. We are family."

Leading up to the deployment, Maine's crew was required to be tested and quarantined as a mitigation measure to Coronavirus Disease 2019.

"Congratulations to the officers and crews of USS Maine on your highly successful return to strategic service," said Adm. Charles Richard, United States Strategic Command. "Bringing an SSBN through an engineered refueling overhaul and returning her to strategic service is one of the most challenging tasks we ask of any of our crews. You should be immensely proud of what you have achieved and we will all sleep more soundly knowing Maine is once again standing the watch. Bravo Zulu, Maine!"

Since the 1960s, strategic deterrence has been the SSBN's sole mission, providing the United States with its most survivable and enduring nuclear strike capability. Each SSBN has two crews, blue and gold, which alternate manning and deploying the submarine. This maximizes the SSBN's strategic availability and allows for proper crew training, readiness and morale.