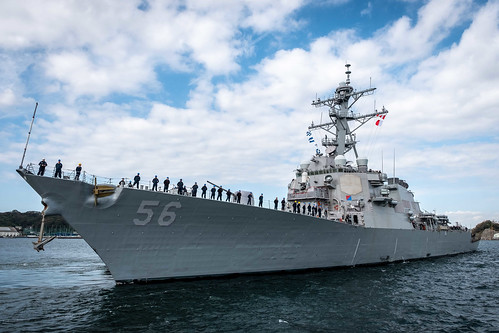 McCain entered basic phase training in November 2019, following the completion of required maintenance. Since that time, the crew has undergone extensive in-port and underway training with teams from Afloat Training Group (ATG) and the Center for Surface Combat Systems.

“McCain has recently finished a very long, successful path to returning to operations at sea,” said Lt. Philip Cherry, training liaison officer for ATG Western Pacific (ATGWP). “In the process of completing basic phase, ATGWP was sent underway aboard McCain to evaluate the ship’s final battle problem, a series of scenarios designed to introduce various levels of stress to the crew, integrating all of the different pieces that were certified over the last year into a cohesive environment to see how crew members perform under real-world conditions.”

According to Cmdr. Ryan T. Easterday, commanding officer of USS John S. McCain, the final battle problem presented an opportunity for the crew to put their collective knowledge and skills to the test.

“For the last 25 weeks, we've been training and certifying in all of the different warfare areas, one after another, and focusing on one thing at a time,” said Easterday. “In the final battle problem, we raise our training to the next level by taking all of those warfare areas and integrate them into a series of complex scenarios where we're doing everything at once.”

Damage Controlman Fireman Apprentice Gabriel Garcia, from Miami, said the experience he gained while participating in various damage control scenarios throughout the ship was very valuable.

“They tried to throw everything at us during the final battle problem,” said Garcia. ”But the more we ran the drills, the more comfortable I became with my role on the hose team.”

With the basic phase now complete, McCain is ready to rejoin the operating forces of 7th Fleet, and is scheduled to operate alongside allies and partners to support a free and open Indo-Pacific. McCain’s crew owes much of their recent success to all of the organizations that continue to provide support.

“We couldn't have gotten here without the support from the community and all the training organizations that helped us accomplish this,” said Easterday.

“Each played an integral part in getting us to where we are today,” said Easterday, “Big Bad John is back and we're ready to take the watch.”