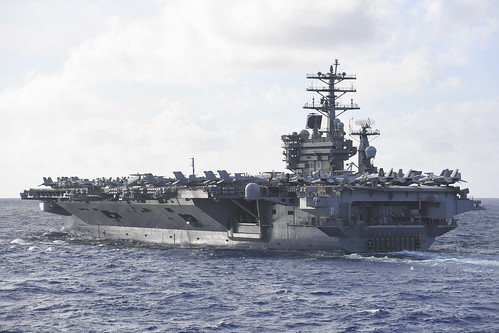 While deployed, the carrier strike force is conducting integrated exercises and operations that maintain responsive, flexible, and enduring commitments to mutual defense agreements with allies and partners in the Indo-Pacific.

“We aggressively seek out every opportunity to advance and strengthen our capabilities and proficiency at conducting all-domain warfighting operations,” said Rear Adm. George Wikoff, commander Carrier Strike Group 5. “The U.S. Navy remains mission ready and globally deployed. Dual carrier operations demonstrate our commitment to regional allies, our ability to rapidly mass combat power in the Indo-Pacific, and our readiness to confront all those who challenge international norms that support regional stability.”

“Only the U.S. Navy can integrate a carrier strike force on this scale and consistently project power to protect freedom of the seas,” said Rear Adm. James Kirk, commander, Carrier Strike Group 11. “With more than 10,000 U.S. Navy Sailors from across the world working together as one cohesive team, these operations are what keep us ready to respond to any contingency.”

The U.S. Navy regularly conducts integrated strike group operations to support a free and open Indo-Pacific, and promote an international rules-based order wherein each country can reach its potential without sacrificing national sovereignty.

In November 2018, the USS Ronald Reagan and USS John C. Stennis conducted combined operations in the Philippine Sea. In Sept. 2014, USS George Washington and USS Carl Vinson strike groups conducted combined operations in the Western Pacific. In 2012, the same strike groups operated in the South China Sea and East China Sea. In 2009, George Washington and USS Nimitz operated together in the Western Pacific, and in 2001, USS Constellation and Carl Vinson operated together in the South China Sea. 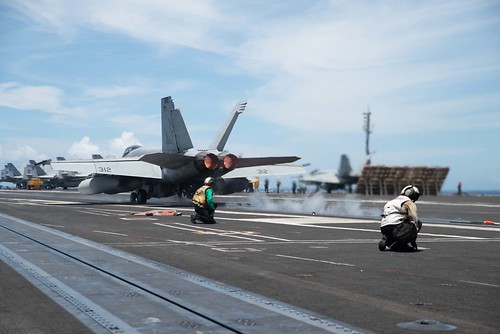