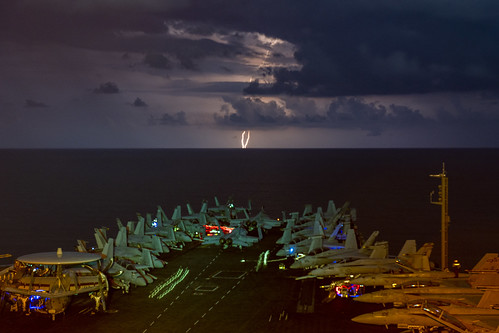 High-end integrated exercises build unmatched flexibility, endurance, maneuverability, and firepower in an all-domain warfighting environment. These efforts support enduring U.S. commitments to stand up for the right of all nations to fly, sail, and operate wherever international law allows.

Sailors from both carrier strike groups continue to stand the watch, defending freedom every day of deployment, and reflecting on the freedoms we hold sacred and celebrate during this holiday.

"Back home we would celebrate the fourth by launching fireworks,” said Yeoman 2nd Class Chareese Knox from Cleveland Heights, Ohio. “But nothing celebrates freedom like launching fighter jets from the middle of the ocean at night.”

“Doing the basic skills well, like efficient aircraft launch and recovery, is the foundation of all our tactics,” said Cmdr. Stanton Hanley, air operations officer, USS Ronald Reagan. “Maintaining our high operational tempo provides the training and repetitions necessary to ensure we can launch large scale strikes as a matter of routine.”

Air defense in a carrier strike force incorporates the capabilities of the embarked fixed and rotary wing aircraft, along with Aegis guided-missile cruisers and destroyers. This provides multi-layered, early detection capabilities to defend the Force against potential airborne threats.

“The ships and Sailors in Destroyer Squadron Nine have been working hard to increase our tactical proficiency in long range maritime strike and anti-submarine warfare,” said Capt. Todd Whalen, commodore, Destroyer Squadron Nine. “On this Fourth of July at sea, it's a privilege to stand the watch with our teammates in Nimitz and Ronald Reagan Strike Groups to protect freedom of navigation and the free flow of commerce.”

This opportunity for two carrier strike groups to train and operate together in the region provides combatant commanders with significant operational flexibility and capabilities that only the U.S. Navy can command.

The Ronald Reagan Carrier Strike Group is the Navy’s only forward-deployed strike group and one of America’s most visible symbols of resolve. The Nimitz Carrier Strike Group arrived in the U.S. 7th Fleet area of operations June 17, and has been conducting dual carrier operations with both the Ronald Reagan and Theodore Roosevelt aircraft carriers. With Carrier Air Wings 17 and 5, as well as accompanying surface forces, Nimitz and Reagan form the most effective and agile fighting force in the world, supporting U.S. commitment to mutual defense agreements with regional allies and partners, and promoting peace and prosperity throughout the Info-Pacific. 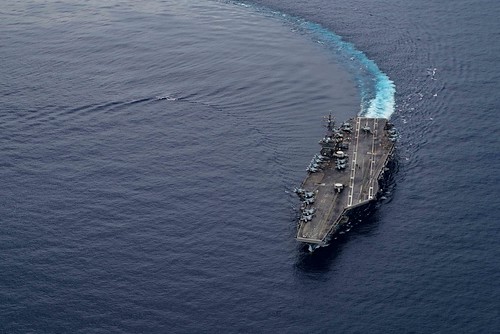 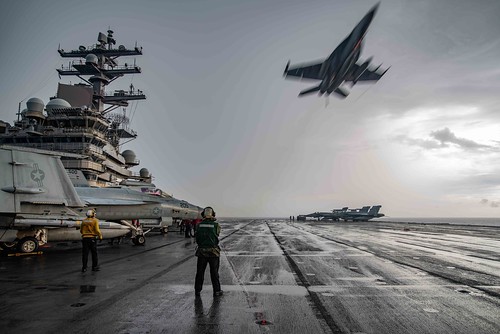