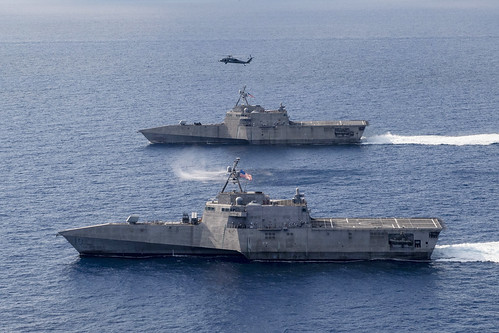 “The MH-60S serves as a logistics, search and rescue, and anti-surface warfare platform while the MQ-8B is designed to increase the ship’s lethality, contributing to the global presence of U.S. naval power,” said Lt. Cmdr. Matt Keeley, “Wildcards” Det. 8 officer-in-charge. “They are very capable machines, however, our most important assets are the hard-working Sailors of Det. 8. Without them, these aircraft wouldn’t fly.”

A Coronado-based expeditionary squadron under Commander, Helicopter Sea Combat Wing Pacific, HSC-23 was the first squadron to deploy a composite MH-60S and radar-capable MQ-8B detachment aboard USS Coronado (LCS 4) during her maiden deployment to the Indo-Pacific in 2014. HSC-23 continues to sustain deployed detachment rotations aboard Independence-variant LCS, to include the entirety of USS Montgomery’s (LCS 8) maiden deployment to the Indo-Pacific from May 2019 to June 2020. Currently embarked on Gabrielle Giffords, Det. 8 continues to lead the efforts of demonstrating the dynamic and integral roles between traditional Navy-manned helicopters and unmanned assets.

Aboard Gabrielle Giffords, Det. 8 and its preceding detachments bring UAV operations to the fleet on a greater scale than ever before. The MQ-8B provides situational awareness and precision targeting support in distributed maritime operations through a manned/unmanned “system of systems” concept. The aircraft can also provide communications-relay and battlespace management beyond visual range to support the tactical commander.

“Our aviation detachments forward-deployed on littoral combat ships represent the best that the ‘Wildcards’ have to offer – regularly pushing the operational and tactical envelope of both the MH-60S and MQ-8B in some of the most challenging environments possible,” said Cmdr. Jeff Schwab, HSC-23 commanding officer. “Every day, they continue to write the book on manned and unmanned teaming, work through the inherent challenges of being independent deployers, and provide much-needed capabilities to the USS Gabrielle Giffords’ crew, DESRON 7, and CTF 76.”

Det. 8 consists of five pilots, four aircrewmen and 16 maintainers or maintenance professionals, with the majority of the detachment consisting of enlisted personnel. They consistently maintain the aircraft, keeping both the MH-60S and MQ-8B fully mission capable and operating at peak readiness, prepared to execute tasking when called upon. The naval aircrewmen control the MQ-8B radar and sensors as well as fly in the MH-60S, operating crew-served weapons and performing search and rescue (SAR) when required.

Chief Aviation Machinist’s Mate Blas Vital emphasized the crucial role that each person on the detachment plays, noting their extensive training and commitment are essential to support the “Wildcard” mission.

“Each member of our detachment provides vital elements to the safe operation and mission readiness of the aircraft and we all rely on one another to accomplish the mission,” says Vital. “From the maintainers to the aircrewmen and the pilots, Det. 8 is a solid team and we all work really well together.”

To date, Gabrielle Giffords has completed high visibility tasking in and around Southeast Asia to include patrols in the South China Sea; presence operation near the Spratly Islands, drillship West Capella, and Chinese survey vessel Hai Yang Di Zhi 4 Hao; integrated operations with USS America (LHA 6); and bilateral exercises with the Japan Maritime Self-Defense Force and Republic of Singapore Navy. Additionally, the MH-60S utilized Hellfire missiles during a sinking exercise as a part of a bilateral event with Republic of Singapore Navy, exercise Pacific Griffin in 2019.

“The MH-60S and MQ-8B carried onboard LCS continue to provide enormous operational flexibility and add to the overall value that LCS brings to the region,” said Capt. Ann McCann, Commodore, Destroyer Squadron 7. “The air detachment onboard Gabrielle Giffords has been a force multiplier, which is exemplified by continued mission successes and the ability to meet any 7th Fleet tasking.”

Attached to Destroyer Squadron 7, Gabrielle Giffords is on a rotational deployment to the U.S. 7th Fleet area of operations in support of security and stability in the Indo-Pacific. 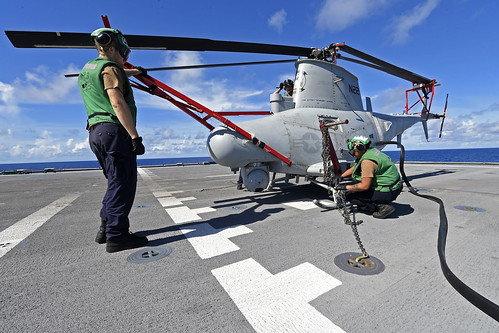 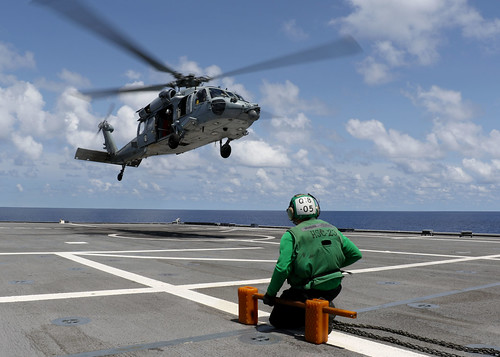