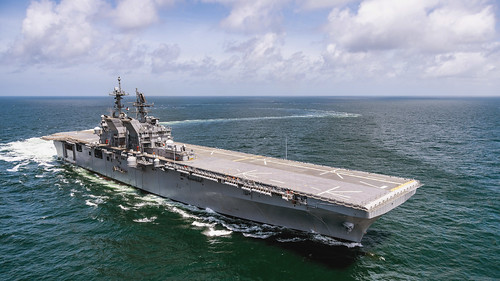 In this file photo, the future USS Tripoli (LHA 7) operates in the Gulf of Mexico during builder's trails in July 2019. (U.S. Navy courtesy of HII by Derek Fountain)

USS Tripoli was administratively commissioned July 15 and is the third ship to bear the name Tripoli in commemoration of the U.S. Marines and approximately 370 soldiers from 11 other nationalities who captured the city of Derna, Libya, during the 1805 Battle of Derna.

Tripoli’s design features an enlarged hangar deck, realignment and expansion of the aviation maintenance facilities, a significant increase in available stowage for parts and support equipment, and increased aviation fuel capacity. The ship is the first LHA replacement ship to depart the shipyard ready to integrate the entire future air combat element of the Marine Corps, to include the Joint Strike Fighter.

Along with its pioneering aviation element, LHA 7 incorporates gas turbine propulsion plant, zonal electrical distribution, and fuel-efficient electric auxiliary propulsion systems first installed on USS Makin Island (LHD 8). LHA 7 is 844 feet in length, has a displacement of approximately 44,000 long tons, and will be capable of operating at speeds of over 20 knots.

USS Tripoli is assigned to the Pacific Fleet battle force and will operate with Expeditionary Strike Group 3.