Hawaii-based ships to sortie ahead of Hurricane Douglas 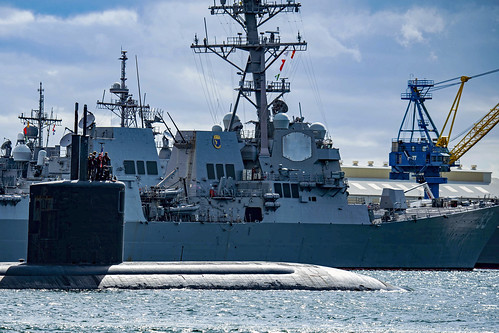 PEARL HARBOR, Hawaii - Rear Adm. Robert Chadwick, commander, Naval Surface Group Middle Pacific, announced that U.S. Navy ships and submarines based in Hawaii not currently undergoing maintenance availabilities have begun plans to sortie as Hurricane Douglas travels toward the Hawaiian Islands. Ships that sortie will be positioned to help respond after the storm, if needed.

"We have been carefully tracking this storm, and based on the current track, we have decided to begin plans to sortie Pearl Harbor-based ships," Chadwick said. "This allows the ships enough time to transit safely out of the path of the storm."

Units will remain at sea until the threat from the storm subsides and Hawaii-based Navy aircraft will be secured in hangars or flown to other airfields to avoid the effects of the hurricane.

The Navy orders a sortie during potentially extreme weather conditions to reduce the risk of significant damage to ships, submarines and piers during high winds and seas. Some ships will not get underway, due to various maintenance availabilities, and are taking extra precautions to avoid potential damage. Commanding officers have a number of options when staying in port, depending on the severity of the weather. Some of these options include adding additional mooring and storm lines, dropping the anchor, and disconnecting shore power cables.

As the Air Force’s 15th Wing and 154th Wing prepare for Hurricane Douglas, the main goal is to keep Airmen, equipment, and infrastructure safe. Additionally, Airmen are preparing to secure all aircraft in preparation for the hurricane.

Personnel in Navy Region Hawaii, including on Oahu and Kauai, should follow hurricane awareness and preparedness guidelines established by city/county and state government.

At the beginning of hurricane season in early June, Navy Region Hawaii provided detailed information in the region/base newspaper Ho'okele for service members, civilian workforce and families. Information included preparing a disaster supply kit, creating a family emergency communication plan and knowing where to go if ordered to evacuate:

Additional information for families is available online at the Navy Region Hawaii website, via the Federal Emergency Management Agency, and the National Weather Service.