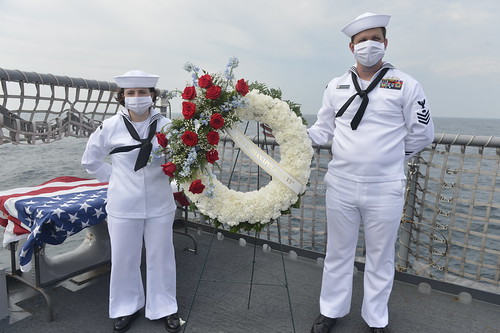 ATLANTIC OCEAN - USS Indianapolis (LCS 17) Sailors recently conducted a memorial wreath laying ceremony at sea to commemorate the 75th anniversary of the loss of the USS Indianapolis (CA-35), which was torpedoed near the end of World War II.

The ship had earned a remarkable battle record through the war. Responding to the attack at Pearl Harbor, her crew went on to serve throughout the Pacific. Bougainville. Alaska. Gilbert Island. The Marshall Islands. Marianas. Saipan. Tinian. Iwo Jima. Often serving as Adm. Ray Spruance’s Fifth Fleet flagship, she seemed invincible.

She had just delivered key bomb components that would bring the war to a close only weeks later. When two enemy torpedoes struck her shortly after midnight on July 30, 1945, the ship sank in minutes. Of the 1,196 Sailors and Marines who served on the ship, more than 880 went into the water. After more than four days of exposure, fatigue, shark attacks and dehydration, only 316 survived.

The current USS Indianapolis Sailors honored at sea their namesake crew who valiantly served and sacrificed by laying a wreath at sea and offering a 21-gun salute during the solemn service.

The formal observance also included remarks from the LCS 17 commanding officer, not only about the large loss of life at sea in defense of their country, but also about those who somehow demonstrated the will and determination to survive “The Sailors and Marines who survived the sinking of USS Indianapolis (CA-35), showed tremendous grit and tenacity under the most adverse conditions,” said Cmdr. Colin Kane, the littoral combat ship commanding officer.

“I hope my crew has embraced these characteristics. War is an ugly thing. Defending our nation is what we signed up for as we joined the Navy. But, we hope we will never have to engage in war.”

He closed with sage advice for his talented crew.

“Remember their sacrifices as you go about your day and ask yourself if you’ve lived up to the example they’ve set.”

The LCS 17 wreath laying event is just one of the commemorative events offered the group of survivors and family members of the perished.

While both ships were named for the city of Indianapolis, in Indiana the Hoosier state, the similarities pretty much end there.

CA-35 was a heavy cruiser roughly 600 feet in length displacing nearly 10,000 tons. With a crew of roughly 1,200, she embarked President Franklin D. Roosevelt on two occasions; was flagship for famed Vice Adm. Raymond Spruance; delivered parts and nuclear material to be used in one of the atomic bombs. Her crew earned 10 battle stars in the 13 years of acclaimed service.

Coming up on the ship’s first year anniversary since commissioning last October, LCS 17 is one of the Navy’s newest and most technologically advanced warships, nearly 400 feet long, a fast, agile mission-focused platform designed for operation in near-shore environments, yet capable of open-ocean operation. With a crew of about 70, she is designed to defeat asymmetric "anti-access" threats such as mines, quiet diesel submarines, and fast surface craft. She is homeported in Mayport, (near Jacksonville), Florida.

For more information on CA-35, visit the Naval History and Heritage Command.

For more information about LCS 17, including videos, photos and more, visit the ship’s Facebook page. 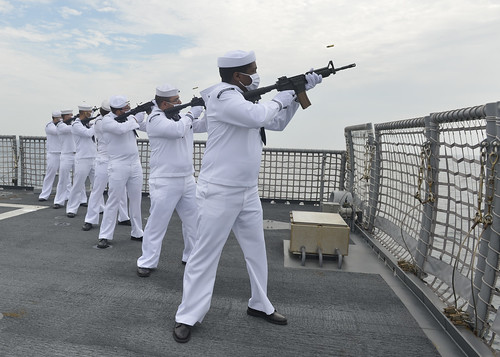