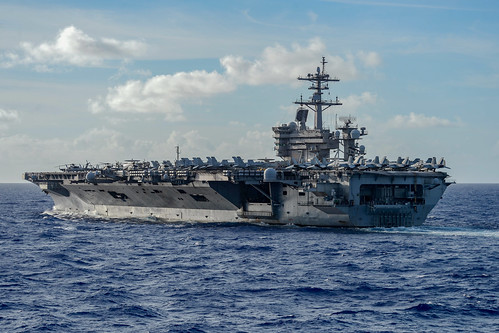 “It was a privilege to lead the Rough Riders a second time weathering the storm that engulfed and sidelined Theodore Roosevelt. The Sailors persevered showing great fortitude in the face of adversity, and reverence and stoicism in remembrance; they have proven that fighting through the threat of infectious disease at sea can be done” said Sardiello. “The resilience and dedication to mission displayed by our Sailors during this pandemic response was truly remarkable. I will be forever in awe of the fearlessness, confidence, and competence that our Sailors of the U.S. Navy show every single day.”

Sardiello is a native of Fremont, Calif., and is a graduate of the U.S. Naval Academy, class of 1990. He previously served as commanding officer aboard the amphibious command ship USS Mount Whitney (LCC 20) and will return to his assignment as director, Joint and Fleet Operations (N3), U.S. Fleet Forces Command. He commanded Theodore Roosevelt from July 2017 to October 2019 and returned to the ship April 6, 2020 following a coronavirus outbreak that interrupted the ship’s deployment. Following the recovery of the crew and the ship, Theodore Roosevelt resumed training and operations in the Indo-Pacific which underpin ready and relevant Naval Aviation capability and capacity from the sea.

Anduze is a native of Manati, Puerto Rico, and is a graduate of the U.S. Naval Academy, class of 1993. He previously served as executive officer aboard the aircraft carrier USS Carl Vinson (CVN 70) and as commanding officer aboard the amphibious command ship USS Blue Ridge (LCC 19).

“I am honored and excited to take over as the 17th commanding officer of USS Theodore Roosevelt,” said Anduze. “I look forward to serving alongside and leading this incredible team of Sailors wherever the Navy and the nation may need us.”

Theodore Roosevelt returned to Naval Air Station North Island July 9 after a six-month deployment in support of security cooperation efforts in the U.S. 7th Fleet area of operations, returning prepared to return to sea when required.