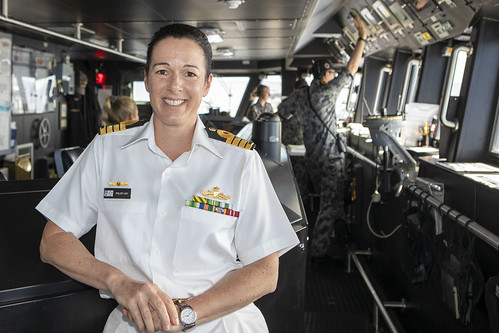 From August 17-31, Hay will command more than 2,500 Sailors and officers across 11 warships from Australia, Canada, France, Japan, the Republic of the Philippines, and the United States.

She will lead them into uniquely complex and challenging multinational environment for forces to hone their skills.

Hay acknowledged the honour of the historic position, but preferred to focus on representing the men and women of the RAN and leading her task force.

“RIMPAC is a test of Australia’s maritime military capability, from warfighting exercises to the missile firings,” she said. “It provides complex and challenging training in a multinational environment, perfect for strengthening interoperability with our regional partners and allies.”

“I am proud to be part of an Australia force which, with our partners and allies, can continue to train and operate in these challenging times. It demonstrates our collective true grit and resilience.”

Hay has always been a trailblazer.

At age 10, she sailed around the world with her family.

In 1993, she joined the RAN and was selected for an exchange with the United States Navy on board Spruance-class destroyer USS John Young (DD-973) as part of the Middle East Force. She was the first female to qualify as an Australian ship’s diver, and the first female to serve in the Australian Minor War Vessel Sea Training Group.

She said she has found her niche in the RAN, which affords its people the room to succeed regardless of gender, sexuality or religion.

“In the Royal Australian Navy, there are no limitations,” Hay said. “We pride ourselves on richness of diversity and being a reflection of the Australian community. I look around and see only proud Sailors and officers serving the RAN and Australia. I hope my journey serves as an inspiration to all who wish to serve.”

Hay said her success in the Navy is driven by a desire to contribute to the harmony and stability of the region, and know that her children will benefit and enjoy a peaceful life.

For that reason, she is proud to be a participant in RIMPAC alongside like-minded nations.

“International naval cooperation ensures maritime security and stability,” Hay said. “The global maritime environment is too large and complex for any one nation to safeguard. RIMPAC helps participants foster and sustain the cooperative relationships that are critical to ensuring the safety of our seas security on the world’s oceans.”

Hosted by Commander, U.S. Pacific Fleet, RIMPAC is a biennial maritime exercise that will be an at-sea-only event this year in light of COVID-19 concerns.

Since 1971, Australia’s participation in RIMPAC has helped foster and sustain the partnerships that secure a free and open Indo-Pacific region.

This year, HMA Ships Hobart (DDG 39), Stuart (FFH 153), Arunta (FFH 151) and Sirius (O 266), are taking part in RIMPAC as part of their Regional Presence Deployment through Southeast Asia and the Pacific.