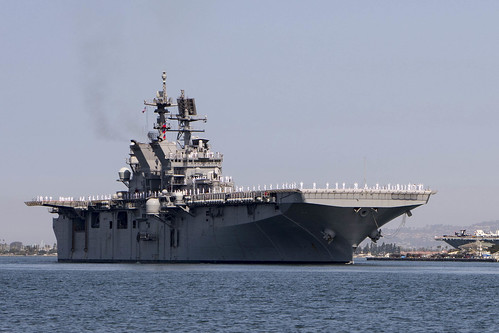 “Our Sailors did an outstanding job in getting Tripoli safely to our new homeport of San Diego,” said Capt. Kevin Meyers, Tripoli’s commanding officer. “Now, we shift our focus to preparing this ship for her future mission: supporting combat operations and providing humanitarian assistance around the globe, in the air, on land, and sea.”

“Tripoli serves as a fine example of our Sailors’ ability to learn, adapt, and continuously improve even in the face of uncertainty,” said Capt. Jennifer Ellinger, commodore of Amphibious Squadron (CPR) 7. “The ship’s arrival here today is exciting and the crew has worked diligently to get to this point.”

“It will be nice to get the ship to her homeport in San Diego, a city that is renowned for its continuing support of our service members," said Master Chief Alicia Harrison, Tripoli’s acting Command Master Chief. "This crew has not ceased to amaze me in how they have risen to every challenge from ship's delivery, to crew move aboard, to operating under new health guidelines, to sail around.”

Tripoli is the second LHA to be delivered to the Navy, and the third in naval history to bear the name which harkens back to the first U.S. battle fought on foreign soil. The name Tripoli was previously assigned to a Casablanca-class escort carrier which saw service in the Second World War. Later, the first amphibious assault ship with the name USS Tripoli (LPH 10) served in Vietnam and during the Gulf War.

Tripoli was built in Pascagoula, Mississippi, by Huntington Ingalls Industries. Prior to departing for San Diego, Tripoli’s crew conducted a 14-day restriction of movement (ROM) in accordance with U.S. Navy pre-deployment guidelines. In addition, the Navy cancelled the ship’s traditional commissioning ceremony as a COVID mitigation measure. The Navy commissioned Tripoli via naval message on 15 July and transitioned the ship into service as scheduled.