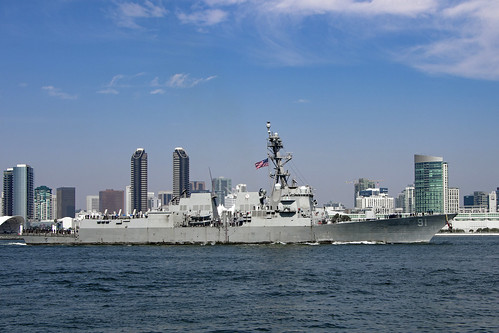 Pinckney, along with a detachment from Helicopter Maritime Strike Squadron (HSM) 75, deployed in January with the Theodore Roosevelt Carrier Strike Group to the U.S. 7th Fleet area of operations. Pinckney arrived in the U.S. 4th Fleet area of operations in April to participate in U.S. Southern Command and Joint Interagency Task Force South’s enhanced counternarcotics operations in the Caribbean Sea and eastern Pacific Ocean.

“The Sailors of Pinckney have helped make the United States a safer place to live,” said Cmdr. Andrew Roy, Pinckney’s commanding officer. “I thank all Pinckney Sailors and U.S. Coast Guardsmen who overcame many obstacles to make sure illicit narcotics will never make it into our homes, schools, or communities.”

During their deployment, Pinckney, with their embarked U.S. Coast Guard Law Enforcement Detachment (LEDET), recovered an estimated 9800 kilograms of suspected cocaine and an estimated 2800 pounds of marijuana worth over an estimated wholesale value of $720 million. In addition, Pinckney also conducted freedom of navigation operations and participated in a passing exercise (PASSEX) with the Guatemalan navy.

“A lengthy deployment is always challenging, even more so in the midst of a global pandemic that kept us all on the ship for the past six months,” said Cmdr. Ryan Conole, Pinckney’s executive officer. “Our team was able stay focused and on mission, and we could not have done that without the support of our families and friends back home who were also dealing with an incredibly challenging environment on the homefront.”

Pinckney joined other U.S. Navy warships, numerous U.S. agencies from the Departments of Defense, Justice and Homeland Security cooperating in the effort to combat transnational organized crime. The Coast Guard, U.S. Navy, Customs and Border Protection, FBI, Drug Enforcement Administration, and Immigration and Customs Enforcement, along with allied and international partner agencies, are all playing a role in counterdrug operations.