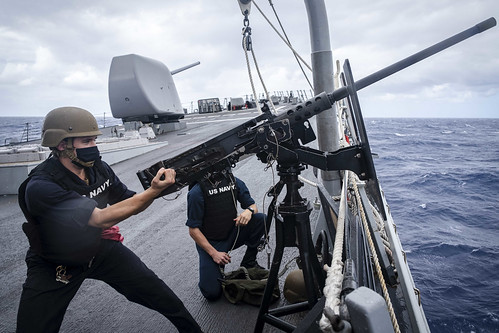 The flexibility and responsiveness of McCain, and other U.S. Navy destroyers is the foundation on which forward-deployed naval forces (FDNF) provide regional security and stability.

“On a destroyer, you get to go to places where some ships may never go,” said Lt. Cmdr. William Rajnay, the planning and tactics officer aboard McCain. “Destroyer life is an adventure. It is definitely fast-paced and challenging at times, but it can be a very rewarding experience.”

Destroyer Sailors are trained for multiple mission sets, contributing to FDNF through independent deployments and when operating as part of the carrier strike group.

“You have to be well-versed in multiple things,” said Chief Intelligence Specialist Justin Ortega. “Learning many roles is an opportunity for Sailors to go outside of their comfort zone and in return, effectively fight the ship and win the battle.”

“The mission is enduring and there is a unique sense of camaraderie being in such a tight knit community,” said Rajnay. “What makes McCain even more unique is the crew. The crew’s hunger and motivation is what will drive this deployment to success. This is our opportunity to excel and do the nation’s work.”

Forward-deployed naval forces can rapidly mass and provide a level of combat power, presence, reach, flexibility, and endurance in support of regional stability, and prosperity in the Indo-Pacific.