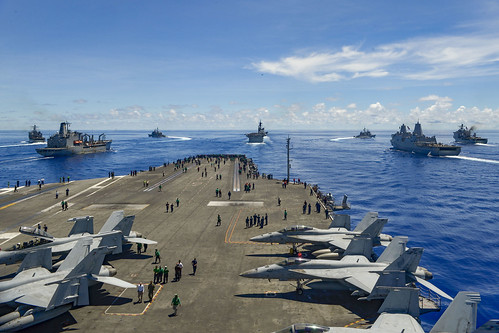 “As one of two forward deployed DESRONs in the Indo-Pacific, DESRON 7 looks for all opportunities to develop and hone our warfighting skills,” said Capt. Tom Ogden, deputy commodore, DESRON 7, and embark team lead. “DESRON 15 has set the tactical standard for years so we wanted to work closely with them. Sitting next to DESRON 15 in high-level live training while underway as they executed sea combat commander provided a second to none training opportunity to refine our operational skills; a critically important task as we operate in the dynamic U.S. 7th Fleet area of responsibility.”

Capt. Steven DeMoss, commodore, DESRON 15, emphasized the importance of DESRON-to-DESRON relationships and training to maintain a free and open Indo-Pacific.

“Destroyer Squadrons 15 and 7 set the boundaries that allow all nations to operate freely across the Indo-Pacific,” said DeMoss. “We are the professional mariners and warfighters that ensure those that threaten our freedom and access to the seas know we patrol the waters between the Indian Ocean and Philippine Sea in accordance with international law.”

The SCC training comes in parallel with DESRON 7 staff’s participation in the annual Cooperation Afloat Readiness and Training (CARAT) exercise series, marking the eighth consecutive year DESRON 7 has been the lead planners for these bilateral exercises. To continue advancing tactical prowess, the staff is scheduled to participate in multiple high-end exercises and training opportunities throughout the region.

DESRON 15 is the Navy’s largest forward-deployed destroyer squadron and is responsible for the readiness, tactical and administrative responsibilities for six Arleigh Burke-class guided-missile destroyers in the region, and serves in support of security and stability in the U.S. 7th Fleet area of operations.