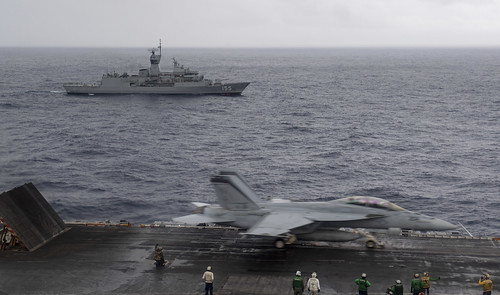 While operating together in the Indian Ocean, U.S. and Australian forces conducted communication integration, cross-deck helo landings between ships, air defense exercises, and conducted a replenishment at sea.

“Sailing alongside Cmdr. Pisani and his team aboard HMAS Ballarat was a privilege and affirms the longstanding and close ties we have with Australia,” said Rear Adm. Jim Kirk, commander, Nimitz Carrier Strike Group. “Our nations also share a seafaring heritage and an enduring interest in a free and open Indo-Pacific. Improving our interoperability through a cooperative deployment strengthens these ties and demonstrates our commitment to maritime security in the region.”

Ballarat and Nimitz Carrier Strike Group participated in the recently concluded Malabar exercise alongside the Indian Navy and Japan Maritime Self-Defense Force, which took place in the Arabian Sea from Nov. 17-20.

Commander Antony Pisani said that the strength of the United States-Australia Alliance was on show as HMAS Ballarat conducted a cooperative deployment with the USS Nimitz Carrier Strike Group in the Indian Ocean.

"The Australian and U.S. ships and aircraft operated together for several days illustrating their high-end warfighting capability and promoting a secure and prosperous Indo-Pacific region," Pisani said. "This activity was a highlight for the 187 men and women in Ballarat. For many, it was the first time they had seen a United States Navy aircraft carrier. It was a delight watching the team's awe as fighter jets were launched from the carrier, illustrating to many the lethality and precision of carrier based air operations. The participation of Ballarat's embarked MH-60R Sea Hawk helicopter which was operating within the strike group illustrates our shared mutual trust and respect and the close bonds between our navies and nations."

Nimitz Carrier Strike Group is currently deployed to the 7th Fleet area of operations in support of a free and open Indo-Pacific.