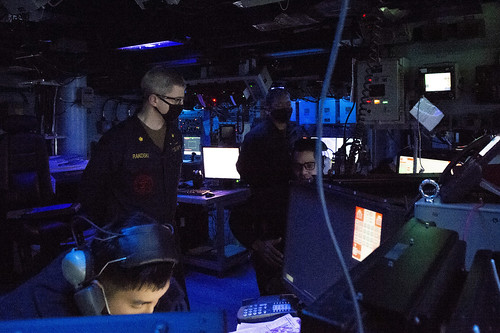 “Leaders across the surface warfare training enterprise have reviewed every surface warfare tactical watch station qualification and gleaned the attributes, roughly 1,200, that are necessary to be competent and successful warriors,” said Vice Adm. Roy Kitchener, Commander, Naval Surface Forces. “From those identified attributes, we acknowledged the commonalities and distilled them to a list of nearly 150 vital skills and 10 core competencies. This pilot program will assess the feasibility of implementing SWCTC aboard ships, and evaluate the efficacy of the training approach in achieving basic, advanced, and High-End Fight Training proficiency.”

SWCTC, informed by an extensive review of surface warfighting qualifications conducted by the SWCTC Executive Steering Committee, will also include an automated system that tracks a tactical watchstander’s career qualifications, currency, proficiency, and experience. SWCTC will provide the framework for delivering schoolhouse and at sea training and support to sustain mariner and warfighting skills throughout careers.

The crews aboard Forrest Sherman and Spruance will receive segments of SWCTC data-based policy relating to DDG 51 class/platform Surface Tactical Training Syllabus and Tactical Action Officer grading criteria. SMWDC Task Force leads and Warfare Tactics Instructors (WTIs) will visit the warships and serve as advisors, analyze data, and collect feedback from the units that will aide in the development of follow-on implementation policies.

“The grand design is for a training system of systems that will track the skills attainment and currency of Surface Warfare Officers and enlisted Sailors as they progress from accession throughout their entire career,” said Cmdr. William Blodgett, SWCTC Task Force West Coast Lead. “This improved system will enable tracking of individual qualifications and will better enable the community to ensure warships have fully qualified watch team members when they are ready to deploy, independent of whether or not the team member completed the OFRP training cycle with the warship.”

SMWDC and the WTI program are critical enablers that help standardize, implement, and deliver tactical training. Through SWCTC, tactical watchstanders will maintain proficiency in a series of tactical tasks that will increase with complexity as warfighting competencies improve. This will result in higher levels of training readiness, warfighting capability, and tools for career-long tactical development of Surface Warriors.

The overall goal of SWCTC is to track performance and experience in a wide-array of tactical environments, very similar to a mariner skills log book for combat information center watchstanders. The end state is better understanding of whether watchstanders and watch teams either possess the requisite skills or need more experience in a particular area in order to perform the task at hand.

Headquartered in San Diego, SMWDC has four Divisions in California and Virginia focused on amphibious warfare, integrated air and missile defense, anti-submarine warfare/surface warfare, and mine warfare. SMWDC’s mission is to increase Surface Force lethality, tactical proficiency, and warfighting integration across all domains.