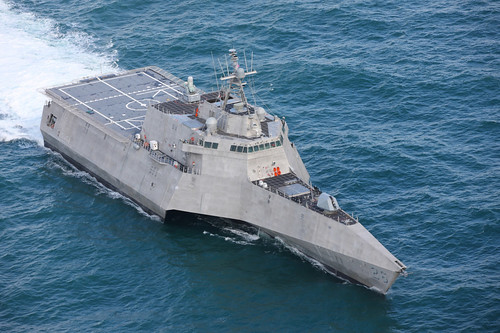 In this file photo, the future USS Mobile (LCS 26) conducts sea trials in the Gulf of Mexico in September. (Austal USA)

Due to ongoing public health and safety concerns related to the Novel Coronavirus (COVID-19) pandemic, the ceremony will take place in compliance with Department of Defense, Center for Disease Control, state public health, state, and local government guidelines and restrictions. The event will be livestreamed to offer maximum viewing by the general public.

“The Mobile crew worked hard to prepare their ship for this moment, and they will continue to see the fruits of their labor as they train and operate at sea,” said Vice Adm. Roy Kitchener, commander, Naval Surface Force, U.S. Pacific Fleet. “We are refining the LCS class lethality and global sustainment infrastructure to better harness the versatility these ships bring to the Surface Force; Mobile is entering the fleet at a prime time in the LCS progression, as we implement lessons learned from other LCS deployers.”

Mrs. Rebecca Byrne, the President and Chief Executive Officer of The Community Foundation of South Alabama and wife of former U.S. Representative from Alabama Bradley Byrne is the ship’s sponsor. As a former Chairman of the Downtown Mobile Alliance and former Executive Director of United Way of Baldwin County, Rebecca has long served her community through civic, cultural, and church leadership roles.

Highlighting the commissioning is a time-honored Navy tradition where Rebecca will give the first order to, “man our ship and bring her to life.”

USS Mobile was built in Mobile, Alabama, by Austal USA and was launched on January 11, 2020.

The future USS Mobile is the fifth Navy ship to honor the city of Mobile, which has a rich historical relationship with the Navy.

The first Mobile was a Confederate, government-operated, side-wheel steamer operating as a blockade runner and captured in New Orleans in April 1862 by U.S. forces. Commissioned as USS Tennessee, the ship was later renamed Mobile. Commissioned in March 1919, the second Mobile, a Hamburg Amerika Lines passenger liner operating between Germany and the U.S. until the outbreak of World War I, was taken over by the Allied Maritime Council and assigned to the United States after the Armistice. Mobile (CL 63) participated in numerous Pacific Theater campaigns during World War II. Commissioned on March 24, 1943, the cruiser received 11 battle stars for the ship’s time in service and was decommissioned in May 1947. The fourth Mobile (LKA 115) was an amphibious cargo ship serving from September 1969 until decommissioning in February 1994.

LCS is a highly maneuverable, lethal, and adaptable ship designed to support focused mine countermeasures, anti-submarine, and surface warfare missions. The Independence-variant LCS integrates new technology and capability to affordably support current and future missions, from deep water to the littorals.

USS Mobile will be homeported at Naval Base San Diego, California.