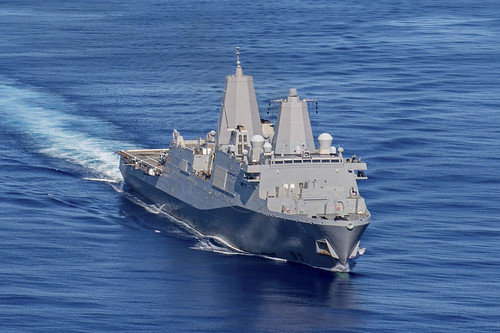 This exercise brings together service members from each nation’s military in a combined effort to enhance interoperability in pursuit of common regional security goals. Service members from participating units plan, coordinate and conduct operations over land and at sea.

“This exercise, by bringing together our air, land, and maritime forces to increase our ability to jointly respond to crises across the range of military operations, is yet another demonstration of our rapidly growing constellation of partners, all united by the common goal of a free and open Indo-Pacific,” said Lt Col Jeremy Nelson, 3D Marine Logistics Group. "It is commonly said that we train alongside our partners and allies in peace to be ready to fight alongside them in war, and exercises like ARC-21 are the best example of this."

"On the New Orleans we are prepared to flex our amphibious skills with each of the teams here and strengthen our joint operational capabilities,” said Capt. Brian Schrum, New Orleans’ commanding officer. "Each event affords us the opportunity to collaborate across staffs developing deeper personal bonds, fostering trust between all our nations and in turn growing as a cohesive naval and Marine force."

The culminating events are scheduled to include surveillance and insertion of forces via JSDF CH-47 Chinook helicopters from French Mistral-class amphibious assault ship Tonnerre (L9014), followed by a helicopter-borne assault via U.S. Marine Corps MV-22 Ospreys from USS New Orleans. Once all forces are together on the ground they will begin an assault on a shared objective.

The exercise is conducted in adherence to strict COVID mitigation measures to protect all participating forces and the local communities. The exercise serves as an opportunity to improve the strength of bonds between Australia, France, Japan, and U.S. in defense of a free and open Indo-Pacific.

New Orleans, part of Amphibious Squadron (PHIBRON) 11, the Navy’s only forward-deployed amphibious squadron, is operating in the U.S. 7th Fleet area of operations to enhance interoperability with allies and partners, and serve as a ready response force to defend peace and stability in the Indo-Pacific region.