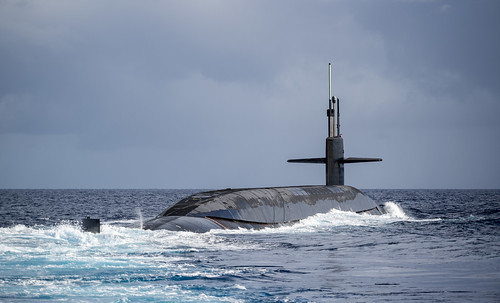 The shift aligns the tactical control of ballistic-missile submarine (SSBN) forces at the same echelon on both the East and West coasts, following the establishment of both a Joint Force Maritime Component Commander and a Task Force Commander for Strategic Forces.

“The shift of tactical control to Group 9 is a great example of how the submarine force continues to prioritize agility and command and control at the most appropriate level,” said Rear Adm. Jeff Jablon, commander, SUBPAC. “Placing the tactical control of our SSBNs at Group 9 provides an opportunity for enhancing coordination and cooperation between force readiness and operational demands on the Ohio-class SSBNs stationed in Bangor.”

The responsibilities of CTG 114.3 are to exercise tactical control over Pacific Ohio-class SSBNs, coordinate and conduct submarine-launched ballistic missile test launches, and direct/coordinate strategic exercises for SSBNs in the Pacific.

“The transfer of tactical control of our sea-based, strategic-deterrent force is an exciting development for our command and will provide some important geographic advantages for the mission set,” said Rear Adm. Doug Perry, commander, Submarine Group 9. “The Group 9 staff has worked incredibly hard with our counterparts at SUBPAC to execute this transfer. Our team is ready to take on this responsibility and we look forward to continuing to provide our nation with a consistent and credible deterrent from the sea.”