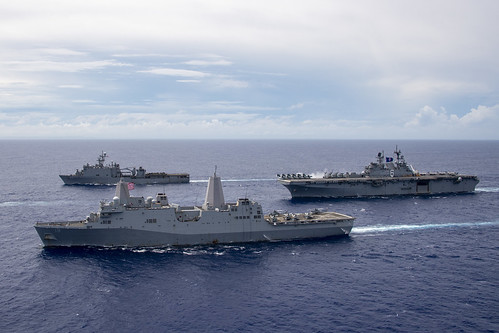 CORAL SEA - The forward-deployed ships of Expeditionary Strike Group (ESG) 7, along with the 31st Marine Expeditionary Unit, arrived off the coast of Australia, July 16, in preparation for the biennial bilateral exercise Talisman Sabre (TS) 21.

Led by the Australian Defence Force (ADF), Talisman Sabre 21 is a large-scale, exercise between Australia and the U.S. to strengthen the military to military alliance and enhance our collective capabilities to respond to a wide array of potential security concerns.

“Emerging events in the Indo-Pacific region underscore the importance of presence to ensure a rules-based international maritime order,” said Rear Adm. Chris Engdahl, commander Expeditionary Strike Group 7. “Talisman Sabre 21 allows the U.S. alongside partners and allies, to further enhance our ability to respond to any contingency as part of a joint or combined effort in support of a free and open Indo-Pacific region.”

Conducted biennially since 2005, across northeast Australia with more than 30,000 military participants, Talisman Sabre is Australia’s largest military exercise with the United States and is a demonstration of our strong alliance that is underpinned by deep levels of cooperation and trust built over decades operating and training together.

During Talisman Sabre 21, the America ARG-MEU team will integrate with the Royal Australian Navy, Royal Canadian Navy, Japan Maritime Self Defense Force, and Republic of Korea Navy for maritime operations further enhancing their ability to respond to crises as part of a joint or combined effort. Partner nations will train together to operate and sustain each other in a contested maritime environment, conducting integrated amphibious and air defense operations, as well as tactical maneuvering and replenishments-at-sea.

At the heart of Talisman Sabre, the U.S.-Australia alliance dates back more than 100 years, encompassing every modern world conflict since World War I. Maintaining and building trust with like-minded allies and partners is crucial to a free and open Indo-Pacific.

Along with regional alliances and partnerships, the Navy is also a steward of the marine environment wherever its ships operate, including the Great Barrier Reef. Prior to Talisman Sabre, crews received training on environmental protective measures to minimize potential impact on marine life, which the Navy employs in accordance with the Marine Mammal Protection and Endangered Species Acts. Australian environmental advisors have been integrated in every step of the Talisman Sabre planning process.

Likewise, mitigation for the continuing COVID-19 pandemic in partner nations has been a key component of Talisman Sabre planning. U.S. military forces continue to take appropriate force health protection measures, helping to mitigate the spread of COVID while maintaining the commitment and capability to train and operate in the COVID environment.

Together, the forward-deployed ships of ESG 7 and elements of the 31st MEU are operating in the U.S. 7th Fleet area of responsibility to enhance interoperability with allies and partners, and serve as a ready response force to defend peace and stability in the Indo-Pacific region.

TS21 is a large-scale, bilateral military exercise between Australia and the U.S. involving more than 17,000 participants from seven nations. It is a demonstration of our strong alliance underpinned by deep levels of cooperation and trust built over decades operating and training together. TS21 advances the Indo-Pacific Pathway’s initiative to promote a free and open Indo-Pacific by strengthening relationships and interoperability with allies and partners. TS21 also supports the U.S. National Defense Strategy by enhancing our ability to protect the homeland and address the full range of potential security concerns in the Indo-Pacific.