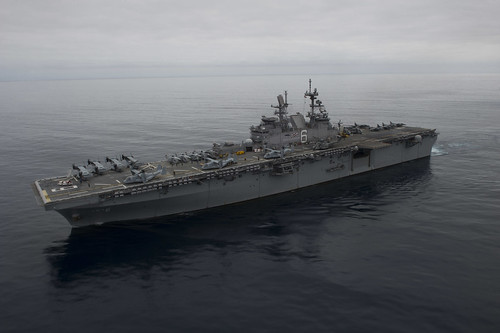 TSST is performed only for new classes of ships, and its purpose is to evaluate the ship's systems and procedures following a simulated conventional weapon hit. The primary areas that are evaluated include the ship's ability to contain and control damage, restore and continue mission capability, and care for personnel casualties. The test is also designed to demonstrate the effectiveness of the survivability features inherent in a ship's design.

"It is essential that we are challenged with different scenarios," said Lt. j.g. Daniel Espinoza, repair locker 5M locker officer. "We need to be challenged to think outside the box and flex our capabilities in the most chaotic situations. I believe changing drill scenarios keeps us out of our comfort zones and trains us to recover from chaotic situations."

"For the past four days we've been at general quarters where we fought simulated fires in multiple spaces, in addition to restoring power during various electrical failures and combatting the ship's fire main pressure being down," said Electrician's Mate 1st Class William Isom, who served as a member of the TSST team. "Overall it was great training for the crew and I believe that our Sailors are more prepared and better trained to save the ship."

"This was not a normal general quarters," explained Damage Controlman 2nd Class Thomas Harrison, repair locker 4 scene leader. "There were blocked passage ways due to simulated structural damage; electrical systems were out. We had to navigate in pitch black working environment to combat simulated fires, and we weren't able to access certain vital firefighting equipment and fire bottles due to the simulated damage. Despite all these obstacles, I believe everyone rose to the challenge and accomplished our objectives with a higher knowledge than we started this underway with."

Throughout the ship, Sailors and Marines worked hand-in-hand to tackle various damage control tasks during the four-day evolution, including medical triage of personnel casualties.

"During TSST, the medical team was provided the opportunity to showcase Navy medicine and really highlight all the skillsets that we bring to the table," said Hospital Corpsman 1st Class Tonya Jury, assigned to Commander, Amphibious Readiness Squadron 3. "We are medically ready and have the capabilities to do [casualty evacuation] all the way down to basic stretcher bearer training."

TSST was also the first time the crew of the America fully integrated with various Marine units, with more than 1,600 Marines standing ready to assist in any situation throughout the evolution.

"So far, this integration has been a very positive experience," said Maj. Michael Chan, 15th Marine Expeditionary Unit (MEU) action officer. "We learn from every activity that we do, but TSST adds a different element on top of our schedule. The scenarios were interesting and definitely had quite a bit of people discussing the possibility of what the Marine Corps' role would be. We are learning to work with the Navy and TSST allows us to socialize those scenarios. As always, we welcome the challenge. It wouldn't be any fun without it."

The benefits of having the America experience the trials that TSST brought will stand the test of time as America prepares for its maiden deployment later this year, and into the future.

"It was a breath of fresh air watching the crew come together as a cohesive unit to overcome some of the most difficult situations," said Espinoza. "The realistic implementations -- multiple jammed fittings, debris blocking passage ways, and firefighting systems offline -- did not make it easy to 'fight the ship,' but we collectively planned around those obstacles and successfully completed all tasks at hand."

America is the first ship of its class, replacing the Tarawa class of amphibious assault ships and is homeported in San Diego. As an aviation centric amphibious assault ship, this platform supports Marine aviation requirements, from small-scale contingency operations of an expeditionary strike group, to forcible entry missions in major theaters of war.