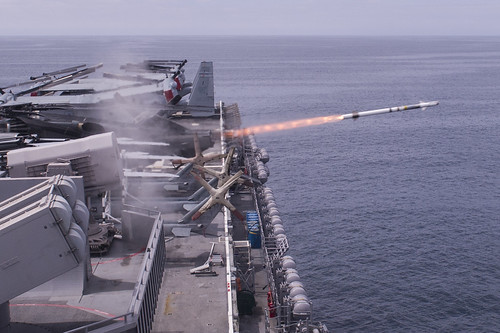 "The purpose of this exercise was to test the capabilities of the combat systems on board and to ensure they were fully operational," said Fire Controlman 2nd Class (SW/AW/IW) Thomas Mirsky, a native of Corona, Calif., assigned to the ship's Combat Systems Department. "The exercise consisted of targeting our RAM to a drone strategically placed in the Pacific Ocean."

According to Mirsky, the unmanned drone was put in place to simulate a missile being fired at the ship in order to test the ship's defense capabilities.

"By testing the ship's defense capabilities, we gain confidence in our ability to defend not only the ship, but keep our Sailors and Marines safe and sound onboard," said Mirsky.

The exercise went off without a hitch and combat systems on board are prepared for whatever is to come in the future.

"The mission today showcased the forward presence that the America will bring with it on deployment," said Chief Fire Controlman (SW/AW) Donald Reichert, a native of Chesapeake, Va., assigned to the ship's Combat Systems Department. "All-in-all, it was a major success."

America is the first ship of its class, replacing the Tarawa class of amphibious assault ships and is homeported in San Diego. As an aviation centric amphibious assault ship, this platform supports Marine aviation requirements, from small-scale contingency operations of an expeditionary strike group, to forcible entry missions in major theaters of war.