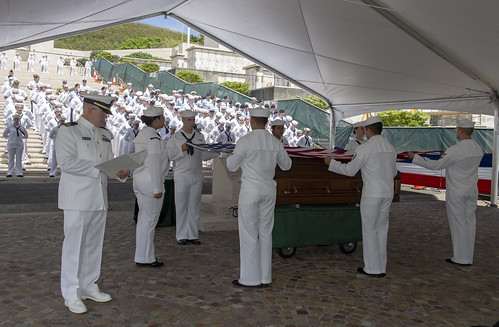 Cargile was killed in action, December 7, 1941, while onboard the USS Oklahoma. Until recently, Cargile was buried under a gravestone marked "Unknown."

On the morning of Dec. 7, 1941, a fleet of Japanese carriers launched formations of dive bombers, torpedo planes and fighters against the vessels moored in the shallows of Pearl Harbor. The USS Oklahoma suffered 429 casualties as it quickly capsized due to damages sustained from multiple torpedoes. The majority of the casualties were never identified.

During efforts to salvage the vessel, Navy personnel collected a large number of remains representing as many as 400 individuals. Most of these were later buried as unknowns at the National Memorial Cemetery of the Pacific in Honolulu.

Recent testing on the remains conducted at the Defense POW/MIA Accounting Agency (DPAA) was able to identify Cargile and remove another name from the list of those missing in action.

During the ceremony, Raymond Emory, a Pearl Harbor survivor, accepted flag on behalf of Cargile family. Emory, receiver of a Distinguished Public Service Award by the Defense POW/MIA Accounting Agency, worked tirelessly since the 1960s to ensure that all military servicemembers who lost their lives during the attack on Pearl Harbor.

Thanks to Emory’s determination, research, and perseverance, as many as 394 Sailors and Marines who lost their lives on the Oklahoma have been or will be identified and returned to their families for the honored burial they deserve just like Cargile.