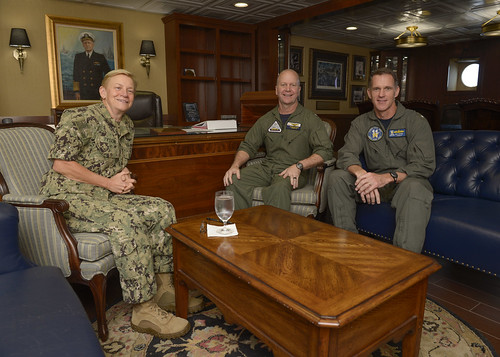 Tyson visited Nimitz to meet with leadership and observe Carrier Strike Group (CSG) 11 during their Composite Training Unit Exercise (COMPTUEX) as they prepare for an upcoming deployment.

This is Tyson’s first visit to Nimitz since 2016, after the ship completed a nearly two-year yard period at the Puget Sound Naval Shipyard and began its condensed Inter-Deployment Training Cycle (IDTC).

“It’s been my pleasure to watch you guys finish up the yard period, which I know is not an easy task,” said Tyson while addressing the crew. “It extended longer than you would have liked, but you guys did a great job getting out of the yards, building the team, getting through workups and getting to where you are today.”

Nimitz left its homeport of Bremerton, Wash., March 13 to begin COMPTUEX and is expected to complete the final phase of deployment training later this month.

“I know that every one of you here on this ship are being challenged,” said Tyson. “Look out for each other. You will be tired and we know that. Make sure you are looking out for your shipmates through every evolution and being safe.”