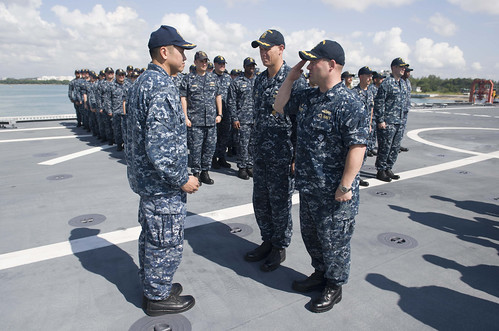 “As a commanding officer, it’s never easy to turn over your warship to anybody,” said Larson. “In this case, I am extremely fortunate to be turning Coronado over to the captain of the ship’s delivery crew.”

The ceremony marked the end of Crew 204’s 10-month rotation aboard Coronado. During the rotation under Larson’s command, “The Royal Punch” crew of approximately 100, including an embarked aviation department, launched the first harpoon missile from an LCS, completed a successful live firing of the SeaRAM Missile System, conducted routine operations in the South China Sea and Sulu Sea, participated in bilateral operations at sea with the Royal Brunei Navy and took part in the Langkawi International Maritime and Aerospace (LIMA) Exhibition.

Meagher assumes the position of commanding officer of Coronado after coming from USS Independence (LCS 2).

“It is an honor and privilege to exchange command with Crew 204,” said Meagher. “[Crew] 203 is poised to continue [their] effort and perhaps even expand on the foundations led by Cmdr. Scott Larson’s team. Make no mistake, we have large shoes to fill, but we are ready for this challenge.”

Crew 204 plans to return to San Diego following the exchange of command.

“This [deployment] has been the most gratifying and rewarding on both a personal and professional level,” said Larson. “My hope is that the learning we’ve done will inform the success of future deployments and shape the LCS program in a positive direction.”

Capt. H. B. Le, commodore, Destroyer Squadron 7, shared his appreciation for Larson and the rest of Crew 204, while also expressing his expectations for Crew 203 during the ceremony.

"On behalf of Rear Adm. Gabrielson and on behalf of the Golden Arrows at Destroyer Squadron Seven, congratulations to Cmdr. Larson and Crew 204 - Coronado Gold - on your fantastic work day in and day out during your deployment,” said Le. “To Cmdr. Meagher and Crew 203 - Coronado Blue - we're confident that you'll continue the high level of excellence that has defined Coronado's maiden deployment."

Coronado is continuing its rotational deployment in U.S. 7th Fleet area of responsibility, and is a fast and agile warship tailor-made to patrol the region's littorals. Coronado works hull-to-hull with partner navies, providing 7th Fleet with the flexible capabilities it needs now and in the future.