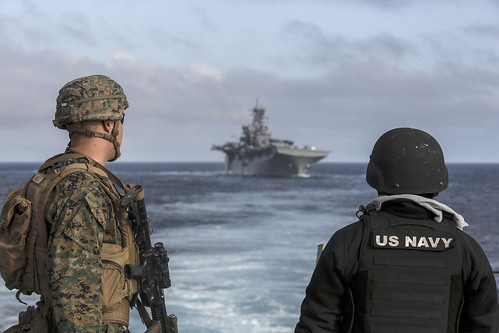 “You don’t get anything done unless you work together, so it’s a team effort,” said PHIBRON Commodore, Capt. Homer Denius. “The ARG MEU is the definition of a team between the Marine Corps and the Navy which have very different cultures and missions that are brought together to enhance the overall mission of the Navy and Marine Corps.”

During PMINT, Sailors and Marines in the ARG trained together to prepare for a wide array of amphibious warfare operations, including amphibious landings, flight operations, air-defense exercises, and defense of the force missions.

“PMINT is the opportunity for the Navy and the Marine Corps to work together and get into a tactical working mindset,” said Denius.

Marine Col. Joseph Clearfield, commanding officer of the 15th MEU, appreciated the early integration to combine forces and get the lay of the land prior to deployment commencing. "This is the first exercise for the AMA/ARG-MEU in a very arduous training cycle," said Clearfield. "But I get the impression this is going to be an epic team."

“We make it our goal to make embarkation and integrations as easy as possible,” said Chief Warrant Officer 3 Ochan Nicholas, Pearl Harbor’s combat cargo officer. “By integrating Marines early, and teaching them about the Navy, we make it easier for the two branches to come together and work together effectively.”

Under the command of PHIBRON, the America ARG and 15th MEU will continue to build and grow together until the end of the upcoming deployment.

Amphibious Squadron 3, the America ARG, and the 15th MEU plan to continue integration during the second phase of integrated pre-deployment training in May during Composite Training Unit Exercise (COMPTUEX).

The ARG and accompanying MEU comprised of a team of more than 6,000 Marines and Sailors whose combined skill sets allow them to execute a wide variety of missions, to include, humanitarian assistance and disaster relief, amphibious assaults, visit board search and seizure, maritime interdiction operations, noncombatant evacuation operations, tactical recovery of aircraft and personnel, and theater security operations. 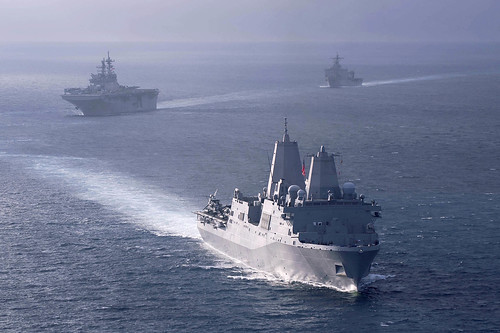